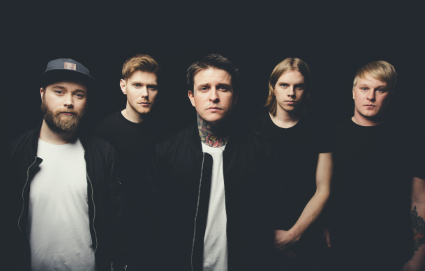 Swedish metalcore group Adept has released their fourth full-length album, Sleepless with Napalm Records. After experiencing and overcoming several setbacks that delayed the release, the band ultimately created a 10-track record that ventures into deep veins of angst and loneliness. Making up Adept is Robert Ljung on vocals, Gustav Lithammer and Jerry Repo on guitars, Gabriel Hellmark on drums, and Filip Brandelius on bass.

Sleepless starts off with ‘Black Veins’, a hard- hitting introductory song that features Ljung tackling a monologue about the constant darkness that surrounds him and how it perpetuates a sense of being undeserving of happiness. The unmistakeable metalcore growls and screaming are present right from the start, and while the guitars seem a bit erratic in the beginning, they quickly find their pace and are balanced out by the rest of the musicians. At the end, the bridge has an Underoath ‘It’s Dangerous Business Walking Out Your Front Door’ -like quality.

‘Rewind the Tape’ pulls at the heartstrings while bringing up the memories of yesteryear by stating, “Let’s make a toast to the past!” The future seems like a frightful place filled with the unknown and the singer’s screams try to keep the past alive. The vocal harmonies are light and high, contrasting the heavy guitars and bass while the tempo of the drums interchanges between that of punk and post-hardcore.

‘The Choir of Absolution’ opens with a light instrumental classical piano that is joined by a violin and a rather moody ambient effect that is ripped apart by heavy drums, sharp guitars and growls. This is one of the album’s standout tracks as it is fast and aggressive, while still incorporating the choir vocals and light piano keys throughout.

‘Lights’ is a masterfully composed track. The clean vocals are bright and the guitars are exquisite. They push this song into uncharted territory combining melodies and harmonies that are not typically found in the metalcore genre and have executed it with grace.

Final track ‘Sleepless’ continues with another monologue keeping to the same theme of despair and sincerity. Ljung injects passion into every single syllable he belts out and the rest of the band follows suit.  Adept is exploring and evolving as musicians and this record reflects that growth.

For more on information on Adept check them out at: