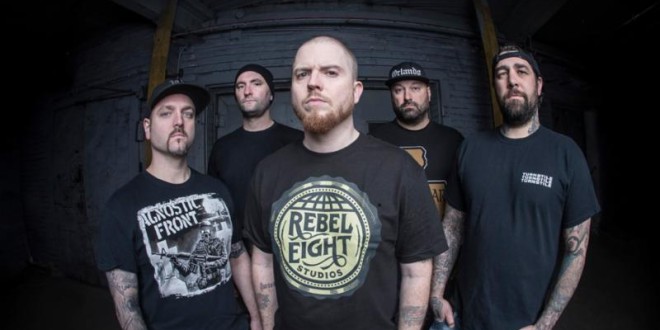 One of Rolling Stone‘s “25 Most Anticipated Metal Albums for 2016,” Hatebreed‘s long-awaited The Concrete Confessional is now available for pre-order here.   The album is set for a May 13 release on Nuclear Blast Records (worldwide), and follows 2013’s The Divinity of Purpose that debuted at #20 on Billboard’s Top 200 Albums chart and at #1 on the Hard Rock Albums chart.

For those who just can’t wait, Hatebreed – Jamey Jasta/vocals, Frank Novinec/ guitar, Chris Beattie/ bass, Wayne Lozinak/guitar, and Matt Byrne/drums – has released a clip that features a taste of three of the brand new songs – “A.D.,” “Looking Down The Barrel of Today,” and “The Apex Within.”  You can check that out here.

Hatebreed is making available an array of CD bundles with the pre-order launch of The Concrete Confessional that will include items such as vinyl, t-shirts, posters, a Prayer candle, a Skull & Maces journal, album digital download and more.  Go to Hatebreed’s online store for all details.

The Concrete Confessional was recorded in Connecticut, produced by long-time collaborator Zeuss (Rob Zombie, Suicide Silence, Whitechapel), and mixed by Josh Wilbur (Lamb of God, Megadeth).  Artwork was created by Marcelo Vasco (Slayer).  The new music is crushing and heavy with provocative lyrics that touch upon a number of topics that have become front-and-center in today’s New Normal:  the rise of terrorism, police brutality, moral decay, greed and betrayal, increased divisiveness, and the fading promise of the American Dream, potently covered on the track “A.D.”

Hatebreed will tour extensively to support The Concrete Confessional, first headlining the European Impericon Festivals 2016 tour that kicks off April 22 in Germany, and then headlining a 25-date North American trek with Devildriver (on all dates), Devil You Know**, and Act of Defiance+ supporting.  General tickets and VIP packages are available for the North American dates; details and purchasing info can be accessed here   That tour starts May 13 in Cleveland.  Hatebreed will play a number of major summer festivals in both the U.S. and Europe throughout the summer.

The confirmed tour dates are as follows: