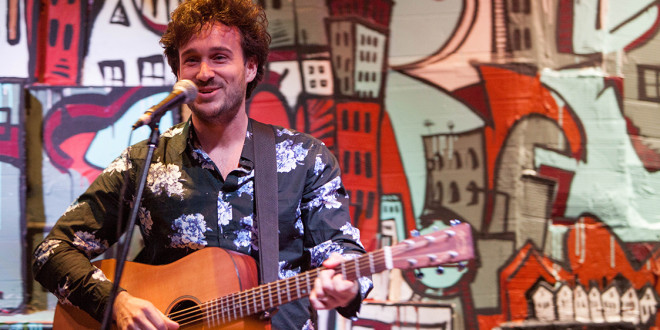 Caleb Hawley played a solo show Friday, March 11, 2016 in one of the first places he had ever played a show- Steel City Coffeehouse in Phoenixville, PA. In addition to everyone’s staple favorite songs, Caleb played some older tunes, such as “We all Got Problems”, “Who’s your Doggie?” and the first song he ever wrote at age 15- “The Cookie Song”.

If you think seeing a Caleb Hawley solo show will be less interactive than seeing him play with a full band, you would be mistaken. During, “Bada Boom, Bada Bling”, a song about having a sugar mamma, he led an audience sing along in which the “Bada Booms” competed against the “Cha Chings” and for the first time in my brief history of this contest, the “Cha Chings” won. Then, after he played “Who’s Your Doggie?”, a song about how he gets jealous of all the attention that his wife gives to their dog, we all got a visit from the pooch of honor himself- Fargo. To close the show, he performed the “The Cookie Song” which comes complete with its own Cookie Dance. Caleb had everyone on their feet to join along as he sung the recipe for how to make cookies.

This intimate venue serves coffee, tea and hot chocolate and has a full menu which includes some incredible mac and cheese and the biggest sandwiches you’ve ever seen. I loved that I could combine my love of coffee with my love of music all in the same place.

He’ll be on tour over the next few months, so be sure to check below for the dates and locations!

Check out Caleb at an upcoming show near you.

Fun Loving Music Photographer and lover of live music in general. I am most likely to be spotted with a coffee in one hand and a camera in the other, somewhere in Philadelphia, New York City and everywhere in between. For more of my music photos: http://myphotos.bellemorephotography.com/
@bellemorephoto
Previous New York Movie unveil single ‘Little Emotion’
Next Gallery: Garth Brooks at PNC Arena in Raleigh, NC 03.11.16