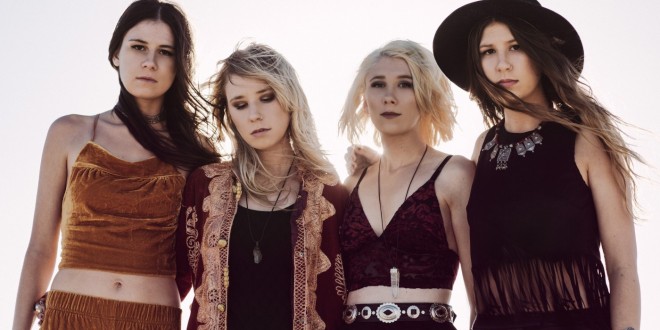 This March will see Stonefield, Australian psych-rock sisters make their way across the States for the very first time. Fresh off an Australian tour with Fleetwood Mac, Stonefield will be kicking things off in downtown LA, playing a string of dates around Austin’s SXSW, including Treefort Music Festival alongside Charles Bradley and Thee Oh Sees in Idaho, VIVA PHX with Crystal Castles, Rocket from the Crypt & Growlers and will be supporting La Luz on a handful of dates.

The four Findlay sisters, who’d go on to become the earthen psych-rock opal that is Stonefield, had been granted their wish of a drum kit by their parents, whose Zappa, Hendrix and Zeppelin records had long been the shared soundtrack of the household. Amy – the oldest Findlay, though at that time just 15 – took a particular shine to the kit and soon began lessons, her practice sessions echoing out across the family’s acreage. It wasn’t long, however, before her sisters were drawn back into the shelter as, one by one, they found their own instruments to wrangle with. Hannah, then 13, started on guitar. Sarah, 12, took on the keyboard. Holly, just seven years old, listened in on her sisters practicing and, perhaps hearing that something was missing, asked her father for a bass.

Now the question is: listen to Stonefield and try to figure out what else the Findlay’s could possibly be doing.

Stonefield’s first song ‘Foreign Lover’ was recorded for a project Amy was working on as part of her tertiary studies. When they arrived home from the studio that day, the siblings’ mother suggested they enter the track in triple j’s Australia-wide unsigned band competition, Unearthed High.

As it turns out, the track ‘Foreign Lover’ won the Unearthed competition and was soon enough, ‘Foreign Lover’ everywhere on Triple J.  Over the next two years, the girls wrote and released their second EP Bad Reality. They released their debut self-titled album in October 2013 which was incredibly well received in Australia.

Internationally the band have played at Glastonbury, The Great Escape, Dot to Dot Festivals and have supported the likes of Foo Fighters and The Kaiser Chiefs. Last year, Stonefield supported the legendary Fleetwood Mac for their Australian tour.

2015 have seen Stonefield put the finishing touches on their sophomore release, which is forthcoming later this year. The first taste ‘Golden Dream’ is an exciting glimpse of the new music to come.