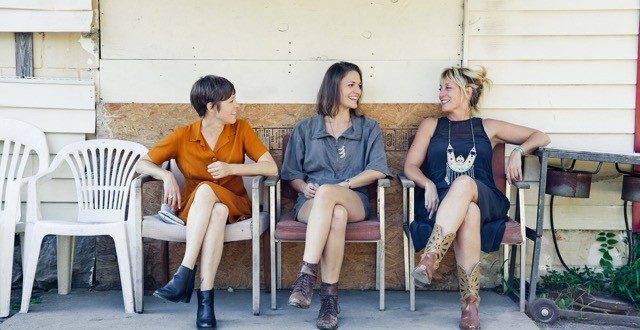 Applewood Road To Play UK Shows Ahead Of Album Release

Recorded in Nashville by Emily Barker, Amber Rebirth and Amy Speace, the Applewood Road album will be release on February 12th via Gearbox Records.  Having appeared live in session for Dermot O’Leary on BBC Radio 2, they’re in the UK this week for a series of shows and in-store appearances:

In September 2014, three songwriters – Emily Barker, Amber Rubarth and Amy Speace – met for the first time in a cafe in East Nashville. Two hours later they had written the song they called “Applewood Road”.

They booked studio time at Nashville’s super cool analogue studio Welcome To 1979 and the following week recorded the song live to tape with just double bass as accompaniment.

So excited were they by the song and the way that their voices blended together, they decided to expand the idea into a whole album. So, six months later, they reconvened in Nashville to write, rehearse and record twelve more songs with both the project and album called “Applewood Road”.

Back at Welcome To 1979, the songs were all recorded live to stereo tape with minimal accompaniment from some hugely talented session players – guitarist Aaron Lee Tasjan, Fats Kaplin on accordion, Telisha Williams on upright bass, Jabe Beyer on harmonica and drummer Josh Day.

The completed album was then handed over to the expert hands of Gearbox Records in London to be mastered at their vintage analogue studio, complete with their own 1967 Heaco Scully lathe, Westrex amplifiers and Studer tape machines.

Applewood Road made their performance debut in Nashville during AmericanaFest 2015. A visit to the UK followed with live shows including Union Chapel in London, a showcase at Tileyard Studios and album playback at Gearbox Records, as well as a live radio session for Dermot O’Leary’s BBC Radio 2 show where they performed “Applewood Road” and REM’s “Losing My Religion”.