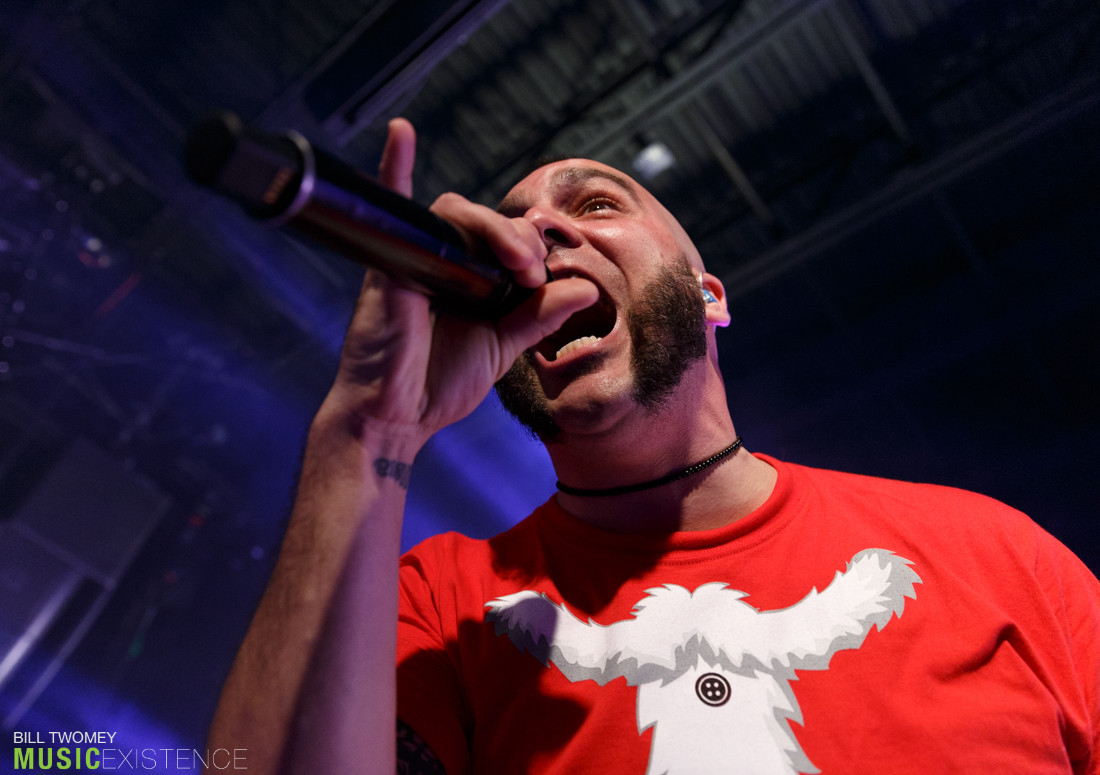 The crowd inside started to warm up before Unearth took the stage. As the music started, fans in the crowd created a giant circle. The circle quickly turned into a mosh pit, which stayed alive for the rest of the evening. Unearth kicked off their set with “The Great Dividers,” which was followed by “The Swarm” and “Watch It Burn.” By the time Unearth started to play “Watch It Burn,” I literally felt like Starland Ballroom might be burning. In addition to the crazy mosh pit, which has just gained enormous amounts of momentum by this point, crowd surfers as far as the eye could see were making their way to the front of the stage. This created a difficult job for security as they had to jump back and forth, from side to side to catch each crowd surfer. It was a sight to see if you ask me. Epic!

One of the highlights of Unearth’s performance was guitarist Buz McGrath. Buz was sporting a WSOU shirt for Seton Hall’s student-run rock radio station. He flung his guitar in every which way possible, without missing a single note. Watching Buz play was an absolute blast. Accompanying Buz was Trevor Phipps on vocals, who belt every note out on the top of his lungs – without doing any damage to his voice. I especially liked his voice during the band’s last song, “My Will Be Done.”

Now here’s an interesting fact… Killswitch Engage’s Adam Dutkiewicz produced Unearth’s fifth studio album, Darkness in the Light. That brings us to Killswitch Engage’s performance at Starland Ballroom. Being the headliner, they put on a show that did not disappoint. Killswitch recently got off a tour with Rage Against. This show was a special treat, as it was part of their Holidaze Rager tour; three days, three shows, three different states. New Jersey, being the last stop of the tour got treated to a full set, along with a flying light up inflatable Darth Vader. Hey, if you really want an inflatable Darth Vader, check out your local party city store.

Killswitch Engage began the night playing “My Curse.” This is one of their most well-known songs and it’s definitely of my favorites. So if you can imagine the crowd as I previously had described with the non-stop mosh pit, turn that up 10 knots. Pair that with the energy and adrenaline infused from the band into the die hard fan base and you have a perfect mixture for an absolute explosion. Fans were lifted to a different level, much like an outer body experience. This was led by Jesse Leach, who is the front man and one of the most bad ass vocalists on today’s metal scene. The pure emotion, sweat and tears that he output that night, will remain and be part of the fans who witnessed it for years to come. Memories of a lifetime were created that night. To understand it all and take it all in, you literally needed to be there.

I was also treated to Killswitch Engage’s newest single, “Strength of the Mind.” You’ll hear this song on Killswitch Engage’s upcoming studio album, Incarnate, due out March 2016. I loved seeing this song live. I had heard the song previously on Sirius XM’s Ooctane, but listening to it on Octane didn’t do it the justice that it deserves. It’s much better live and it’s one of Killswitch Engage’s harder songs. Justin Foley is a monster behind the drum kit on this song. The amount of strength needed to pound the skins the way that he does makes you think he is not even human. However, he did it was ease. Jesse’s voice shines on this song, especially in the middle of the song, where it slows down and you can hear the true talent that he is capable of producing.

As mentioned before, with this being a unique show as part of the Holidaze Rager tour, the stage setup was unique. On stage left, you had the inflatable Darth Vader. Center stage had an inflatable arch that crossed the entire span of the drum kit, with “Merry Christmas” plastered on it. Stage left was also equally awesome, as the inflatable Yoda took over from behind the amps. In front of all the amps on stage were random wrapped gifts. Add in the band dressed in Santa costumes and that was the icing on the cake.

The final song of the night for Killswitch Engage was “The End of Heartache”. Jesse Leach continued a Starland tradition during the encore. Like many other artists who’ve played at Starland, he made his way through the sold out crowd to one of the side bars. He climbed up on top of the bar and sang as he was walking around shaking hands of every fan that he could. I’m looking forward to see what 2016 will bring for Killswitch Engage. Stay tuned and check them out if they’re in your neck of the woods.