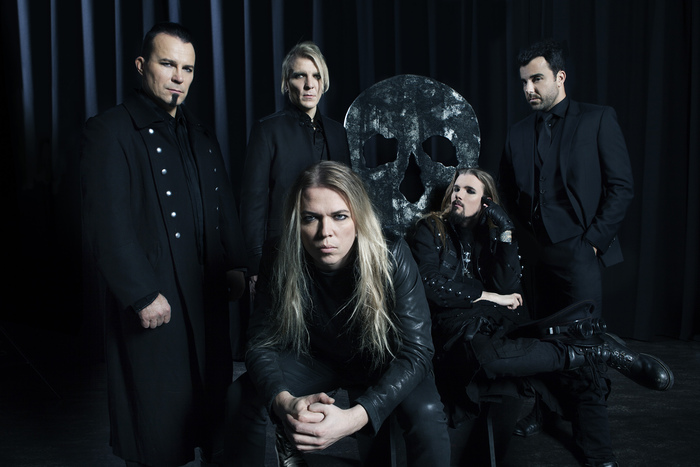 2015 has been a head-banger’s dream. We’ve seen release after release of deep cuts, emotional lyrics, and heavy riffs that you can feel deep in your core. Trying to go through all the amazing albums to come out this year and pick out the very best is nearly impossible. I had intended to keep this list short and go with my top 5, but why stop there? There’s just too many awesome albums that deserve a mention, so I decided to go with a top 10.

This year saw many comebacks by some major names in the rock industry, including Marilyn Manson, Disturbed, and Papa Roach. Some bands even had a change in their lineup and came back harder than ever. This has also been the year of amazing music from new and up-and-coming bands. So without further ado, I present you with the year’s top 10 hard rock/metal albums of 2015.

Michigan hard rockers, Pop Evil, have seen an incredible rise in popularity with the August release of Up. “Footsteps” was not only played on radio stations across the nation, it was also featured in commercials for Dodge Ram trucks, and rightly so. This uplifting track is beyond catchy, grungy, and has easily become a favorite of many. But that’s just the start of the album. From there it only gets better. The happy-go-lucky “Ways To Get High” and the seduction in “Lux” are other key factors in why Up is one of the best albums this year.

I first came by the Brookyln-born rocker trio by way of Spotify. “Lydia” came on and I was instantly hooked. These newcomers into the rock scene are the complete package: heavy distorted guitars, gut-punching bass, driving drums, all wrapped up with Johnny Stevens’ sultry, raspy voice. This album is full of various influences, from the bluesy feel in “Lost,” to the jazz-like “Bath Salts,” to the incredibly catchy “Bloodfeather.”

Even though Halestorm formed in 1997 in Pennsylvania, the latest release from the female-fronted rock group has gained them new listeners. This outspoken album easily stands apart from the competition, and Lzzy Hale’s voice is both captivating and empowering. It is beyond easy to get lost in tracks like “I Am The Fire,” just as it impossible to not put “Amen” on repeat and scream it at the top of your lungs.

Disturbed proved that they still dominate as they announced their return from hiatus in June before releasing Immortalized, which quickly topped the charts and became the band’s fifth consecutive number-one debut on the US’s Billboard 200, making them the third band in history to do so, the others being Metallica and Dave Matthews Band. And with high-powered tracks like “Who” and “Open Your Eyes,” it’s easy to see why.

MUST HEAR: “The Vengeful One”

Packed full of raw emotion and high-octane riffs, Malevolence has been one of my most enjoyable albums of 2015. The gothic hard-rock group has been climbing the ranks, and with Ash Costello’s vocals effortlessly reaching deep into your soul, it’s easy to see why. The raw emotion in “Malevolence,” the infectious “Save Myself From Me,” and the sinfully sexy “Scream” are clear favorites, and are only small parts of what makes this album the best New Years Day has released so far.

Another favorite of hard-rockers everywhere, F.E.A.R. climbed to number 15 on the Billboard 200 charts, making the album more successful than Papa Roach’s previous two releases, Time For Annihilation and The Connection. Featuring empowering tracks like “Face Everything And Rise” and deeply emotional cuts like “Gravity,” which features the lovely Maria Brinks of In This Moment, Papa Roach is clearly moving up the ranks.

The high anticipation that surrounded the release from the insanely popular Sheffield, UK-based metalcore band, Bring Me The Horizon, was unavoidable. Surely, all of us had at least one or two friends on social media that was going absolutely gaga over this album, before and even months after its release. It quickly became apparent, because with tracks like “Throne,” “Happy Song,” and “True Friends,” this energetic collection of 11 tracks fired up the metalcore scene with a renewed vigor.

If you haven’t heard it yet, get ready and make sure your neck can handle all the head-banging you’re about to do. This album comes at you hard, fast, and un-relentlessly. Five Finger Death Punch has released their most unapologetic album to date, and it’s every metal lover’s dream. From the explosive opening track, “Got Your Six,” to the rage-filled “No Sudden Movement,” and even the somber and deeply personal “Digging My Own Grave,” Got Your Six strongly stands as one of the best rock albums of the year on everyone’s list.

MUST HEAR: “Jekyll And Hyde”

When the undeniable king of gothic and grotesque rock puts out new material, the masses will flock to it. The Pale Emperor is no different, and has been widely considered as some of Manson’s best work since Mechanical Animals. Returned is that dark and gritty sound coupled with Manson’s unique and snarky vocals. This entire album is sure to rekindle the fire in every fan’s heart. If nothing else, “Deep Six” is sure to get people dancing, “The Mephistopheles of Los Angeles” will inspire the philosophical thoughts (really, this is one of the most philosophical songs I’ve heard in some time), and the delightfully creepy “Cupid Carries A Gun” will crawl right in to make this album an unforgettable listening experience.

MUST HEAR: “The Mephistopheles of Los Angeles”

Easily my favorite album of 2015 across the board, the Finland-based four-piece, famous for redefining the cello, added vocalist Freddie Perez to their line-up and the resulting album was nothing short of electrifying. From the hair-raising “Cold Blood” to the soft and somber “Sea Song (You Waded Out),” this wild journey belongs in every hard rock and heavy metal fan’s collection. This album is solid, from start to finish, and marks a new chapter in Apocalytica’s rise to the top.