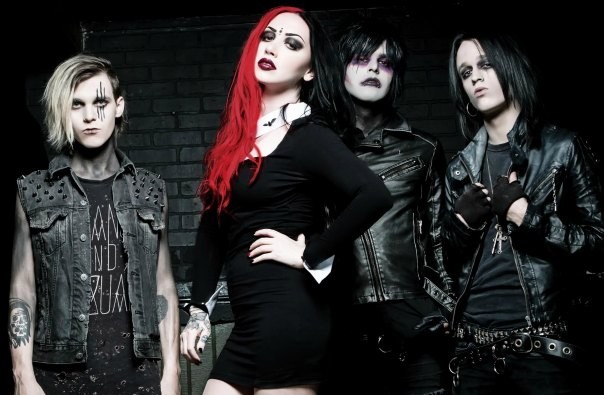 Get ready for the no-holds-barred New Years Day album, Malevolence, available now through Another Century Records. This album is sure to climb into the top ranks of any hard rock fan’s “most repeated CDs” list with undeniably high-octane riffs and powerful raw vocals.

New Years Day formed in 2005 in Chino Hills, California. Since then, the band has gone through a plethora of members, with the current line-up consisting of Ashley “Ash” Costello (lead vocals), Nikki Misery (lead guitar), and Jeremy Valentyne (rhythm guitar and backing vocals). New Years Day has been steadily making a name for themselves through social media sites, most notably Myspace, and tours with William Control, Combichrist, The Birthday Massacre, and more recently Motionless In White. While on Warped Tour this year, the band debuted “Kill or be Killed” which they later released on June 26th. Nearly two months later, on August 12th, New Years Day announced their first ever headlining tour, “The Other Side Tour,” which kicks off on October 4th in West Hollywood, California.

Malevolence kicks off with the aforementioned single, “Kill or be Killed.” The soft intro is quickly built up into a hard, driving song that’s impossible to not nod (or bang) your head to. Vengeance is a strong theme here, as the lyrics easily evoke that feeling of having no other choice but to fight back after you’ve been backed into a corner. That same emotion evolves in “I’m About to Break You,” as Costello sings about reaching a breaking point after someone has been pressing all of her buttons, despite being warned not to over and over. “Alone” switches things up a bit, allowing us to look past the external struggle, into the internal fights that come with self-loathing. You take the blame, simply because you feel as though you’re the flawed one. Costello’s screams reach down somewhere deep and really allow the listener to feel the anger and betrayal in “Left Inside.”

The album’s first single, “Relentless,” keeps the hard-hitting energy flowing as the vocalist defiantly screams her purpose to never give up, despite how much she’s bleeding from the ones who have held her back. The catchy riffs and lyrics in “Save Myself From Me” make sure to get this track stuck in your head. On my first listen-through of the album, I immediately skipped back to this one to listen to it again. I feel as though this song is about hitting rock bottom, so there’s no other alternative but to build yourself back up, save yourself, and try to get back on top. “Suffer” slows things down, making it seem like it’s going to be a soft ballad, but the band kicks things right back into full-throttle at the chorus, then slows back down at the second verse. Many feel as though true love and pain are one in the same and this number really showcases that idea. Next up is the high-energy “Anthem of the Unwanted.” This is definitely a call to arms for anyone who has ever been put down to stand up, speak up, unite, and fight back against their oppressors.

Heads up, the next track on this album will likely make you blush. “Scream” is an undeniably sultry song, and I love it. This number fits right up there with Halestorm‘s “Amen” for me on my list of songs about women owning their sexuality. Effortlessly capturing the confusion and difficulty of questioning your reality when people are playing mind games with you, “Your Ghost” is a desperate cry to end it all so you can start over and learn to feel again. First released on the Epidemic EP, “Defame Me” speaks of giving up on someone who you would’ve given everything for. There’s a strong feeling of being pushed to the point where you just don’t care anymore, so it no longer matters if that someone hates you. The title track, “Malevolence,” is easily the most powerful track on the entire album. I feel as though every song has been slowly building to this pivotal moment where the only emotion left is evil and your only remaining desire is to destroy everything around you after you’ve had every little thing mercilessly ripped away.

This highly emotional album has easily become my new favorite, and it stands to be one of the best albums of the fall, if not of 2015. Head over to iTunes to grab yourself a copy, put it on repeat, and let these songs get stuck in your head for days.