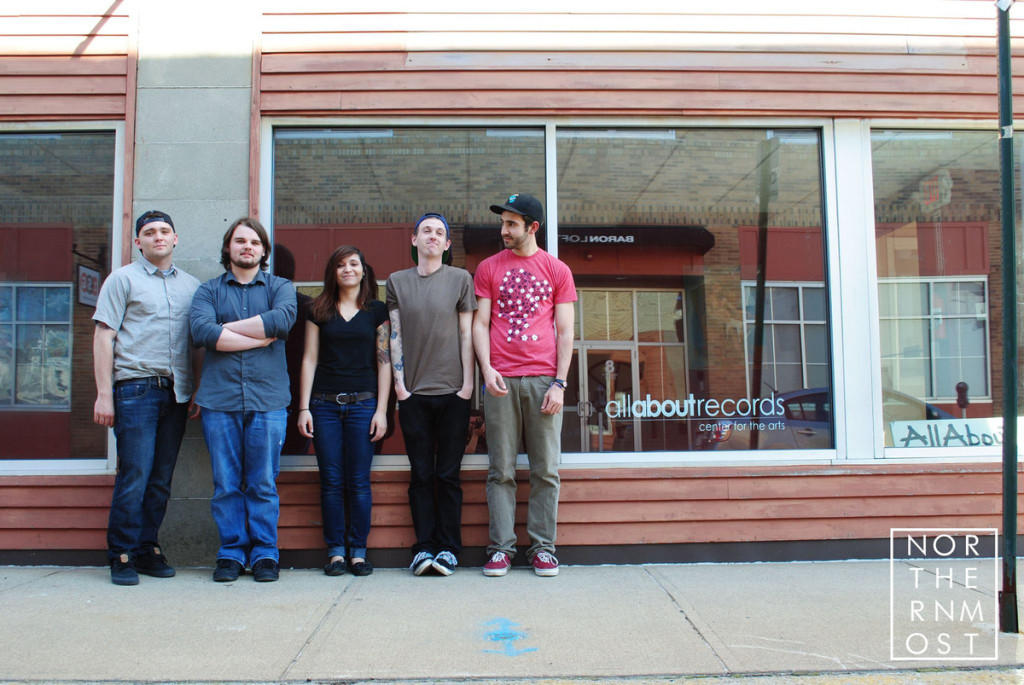 Cambridge, Massachusetts newcomers Northernmost successfully demonstrated an unbound tenacity in their local scene. After the release of Culprit, the quintet kept expanding to show for their quick success. They’ve branded themselves as “Reverb Rock,” a style that combines the textural depth of dreampop with a post-grunge accessibility. It finds definite unity in all things heavy and blissful, and exhibits sufficient creativity and potential to contend in today’s modern rock movement.

In their latest EP, Pinedale, the band provides an accurate musical depiction of what it feels like to be caught in a personal fog. Each song represents a different struggle in the internal swamp of sorts, and the listener can easily follow along with the messages conveyed. The down-tuned riffs have a certain bite, and are blended in such a way that allows the accentuating airy guitars to flow freely. Vocal duties shift between guitarists Jesse Field and Scott Myers. The dreampop influence is also more prominent throughout the EP, both stylistically and lyrically.

The opening song, “Afterglow,” deals with finding fulfillment in the midst of seemingly detrimental circumstances. Myers sings lead in a gritty emotive hardcore tone, expressing the need to defend his choices in life, given the limited opportunity available. The pre-chorus drum fill sets a nice ambience, with smooth harmonies overtop. In the chorus, he notes that time is dwindling, and that superficial trends continue to dominate society. The intro riff is repeated as the melody of this phase, but feels especially welcome when elevating the vocals. At the bridge, I liked how both guitarists sparingly harmonized each other as they carried into the solo. I was stunned by the panning effects on the vocals, as they really gave the feeling of retreating to a peaceful comfort zone. The following track, “Cloudy,” is the carrier single of the EP, as well as my introduction to the band. Fields’ vocal tone is decidedly poppier by contrast, although equally as accessible. Likewise, the instrumentation is distinctly upbeat. In the song, Fields describes a seemingly anonymous letter, presumably filled with poignant detail. He assumes it is from someone with whom he has lost contact, yet contemplates opening it right away. Still perplexed by the contents of the letter, he keeps replaying a dream in his head where he is unsuccessful in reuniting with that person. The last line of each chorus is “just call me on your way home,” implying that a simple, chance means of contact would be enough to ensure that they are alive and well. However, for all the letter’s coincidental poignancies, it is actually addressed to someone else.

“Milo,” the penultimate track, expands upon the theme of separation anxiety, albeit with a more subdued tone—neither explicitly positive nor negative. The feedback during the intro morphs into a numbing dissonance that compliments the main melody. Its sharp lead parts represent a mind under stress, and proceeded by a fluid and relaxed rhythm section. From the lines, “Such a senseless fright/You know you’re so damn right,” I was reminded of a time that was worried about someone despite their inherent self-sufficiency. Even under those circumstances, there’s still a willingness to cling to the more poignant moments of childhood, where one is reminded of how they became aware of the impact of their actions. In doing so, they continue to develop a more grounded perspective on life that involves resting assured of the other’s security. The final track, “Greenbrier,” plays like a retrospective, as if to simply acknowledge the situations that seemed initially stressful as mere obstacles to growth. The reverb feels weightless, almost as if to represent certain contentment. Once the chorus hits, there is a careful blend of grounded and hardcore harmonies to emphasize the sincere passion of both singers. At the end, a thought provoking question leaves the listener curious whether or not the journey will continue: “You said so many things/How many did you mean”?

Overall, Pinedale succeeds in its seamless flow, focused arrangements and sensible sequencing, all essential in shooting toward longevity. Whether Northernmost decide to expand their global reach beyond the internet is up to them, but they are fully capable. Although the pedestal for rock music has undergone myriad permutations—not quite the juggernaut it once was—their sound maintains a humble approach in satisfying both underground and mainstream rock fans alike, be they ten thousand, or a handful.

For more info on Northernmost, visit the following:

I come from a family who is passionate about all things music. I learned to sing at an early age, and by 13, had my very own Fender Strat guitar. I tried my hardest at learning all that I could. Because I was born with cerebral palsy, I had to teach myself an adaptive playing style. I learned to write and record my own music, despite these difficulties. In college, I started making great use of my writing abilities by reviewing music, as well as copy editing. I guess it's best to stick with what you know, while welcoming a fair challenge at the same time.
Previous The Flux Machine Releases “Run Away” Music Video From Debut Album “Louder!” (Out Now)
Next Jaeger Wells Interview