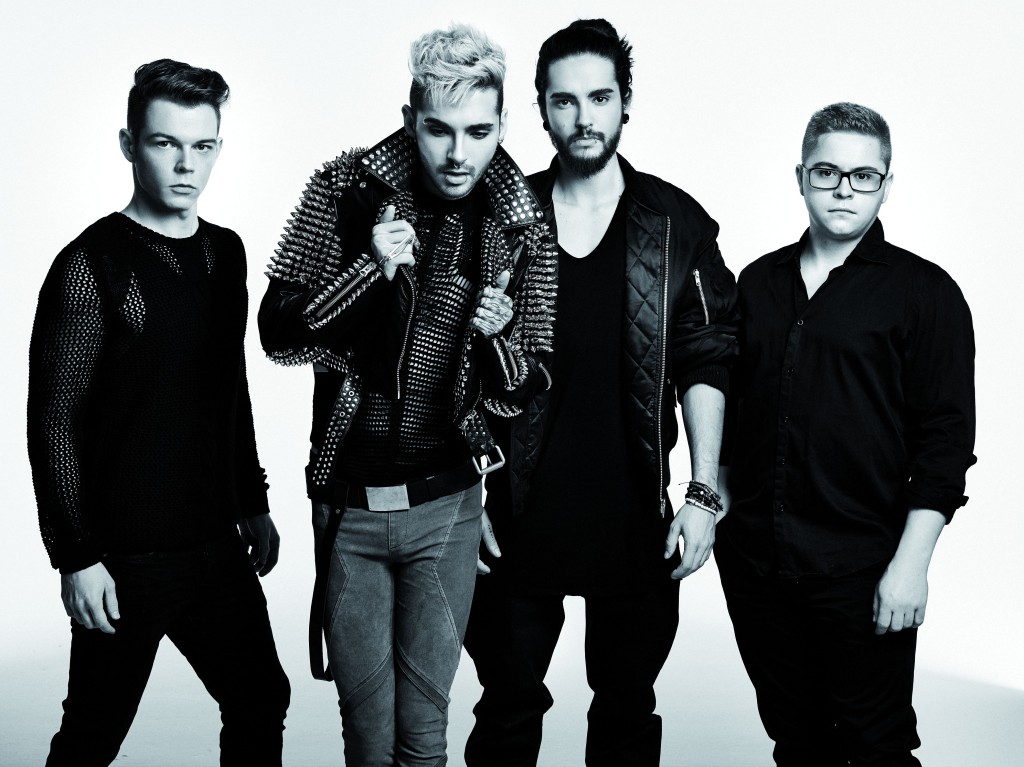 Coming off their March 2015 successful sold-out tour in Europe, TOKIO HOTEL are now deep into the U.S. leg of the “Feel It All World Tour 2015: Part 2 The Club Experience North America” on Monday, July 27 at The Fillmore in San Francisco, CA. The headlining tour–with support from De-Code labelmates Pionear and INGLISH on select dates and MXMS–will bring the international superstars coast-to-coast with stops in Los Angeles, Chicago, New York, Philadelphia, and other major cities along the way. See below for a full list of dates.

“We wanted to bring an arena-like production to small venues and give the fans a unique experience in a more intimate setting,” lead singer Bill Kaulitz shares.

“We’ve grown up and so has our music,” adds Bill. “We are really into electronic music and the show production on this tour is more of what you would expect at an EDM show. Our light system, costumes and projected visuals play an integral part of the Club Experience.”

Following their latest U.S. full-length album release, KINGS OF SUBURBIA (De-Code LTD), in late 2014, TOKIO HOTEL–twin brothers Bill (lead singer) and Tom Kaulitz (guitar, backing vocals), Georg Listing (bass) and Gustav Schafer (drums)–released their Feel It All EP this past April which features remixes of “Feel It All” and “Love Who Loves You Back,” both originally released on the LP. Two of the newly re-worked versions of “Love Who Loves You Back”—Pionear remix and Cazzette remix–charted Top 10 on the UK Club chart in May. Check out the official music video for “Love Who Loves You Back,” which has amassed nearly 8 million views here.

With their 2005 debut album, TOKIO HOTEL rose to become the most successful German rock band of the last 20 years. 7 million copies of their releases have been sold worldwide, and with around 160 Gold and 63 Platinum awards in 68 countries and well over 100 national and international awards, TOKIO HOTEL is an international phenomenon. Never before had a German band won an American MTV Video Music Award until they took home the honor of “Best New Artist” in 2008; they have also been recognized with the Japanese MTV Music Award for “Best Rock Video” in 2011 and five European Music Awards. It all adds up to a career utterly without parallel.

At the absolute height of their fame, brothers Bill and Tom Kaulitz decided to abruptly move to California. Submerged in the anonymity of Los Angeles, their experiences there lent them new creativity and inspiration which they used to write and produce KINGS OF SUBURBIA, their third international studio album.

“I feel like it was the first real life we’ve ever had,” says Bill. “We had come out of school at 15, started the band, and from that moment on, there was no private life, only Tokio Hotel. “We were running away from the success, we were trying to get away. We just wanted to live.”

“We wanted to do regular stuff, things we couldn’t do before,” Tom adds. “I was riding my bike, bought groceries and went to the DMV. It was fucking great.”

KINGS OF SUBURBIA is TOKIO HOTEL‘s most defiant declaration to date. They worked with an eclectic group of producers and were influenced by top DJs they’d see at L.A.’s hottest clubs. But for the first time in their career, the Kaulitz brothers handled the majority of the studio work, with Tom stepping to the forefront, expanding his sonic repertoire to include not just the guitar, but piano, drums and synthesizers.

From the club-heavy wallop of “Feel It All” to the softer, introspective “Run, Run, Run” and “Love Who Loves You Back,” it’s an album that finds the Kaulitz twins pushing limits of sanity and discovery, a singular statement born out of one very important realization: Their band could mirror their lives, could provide the soundtrack to the parties that never end. If it feels alive, well, that’s because TOKIO HOTEL were living it as they were making it.

“With this album, everything is exactly the way we want it, and I feel like this is the first time it’s that way,” Bill says. “We did everything we wanted; it’s not like somebody wrote a song that I have to sell. This is 100 percent what we wanted to do. It feels just right!”

Catch TOKIO HOTEL on tour in the U.S.:
with support from MXMS:

Watch the video for “Love Who Loves You Back”: