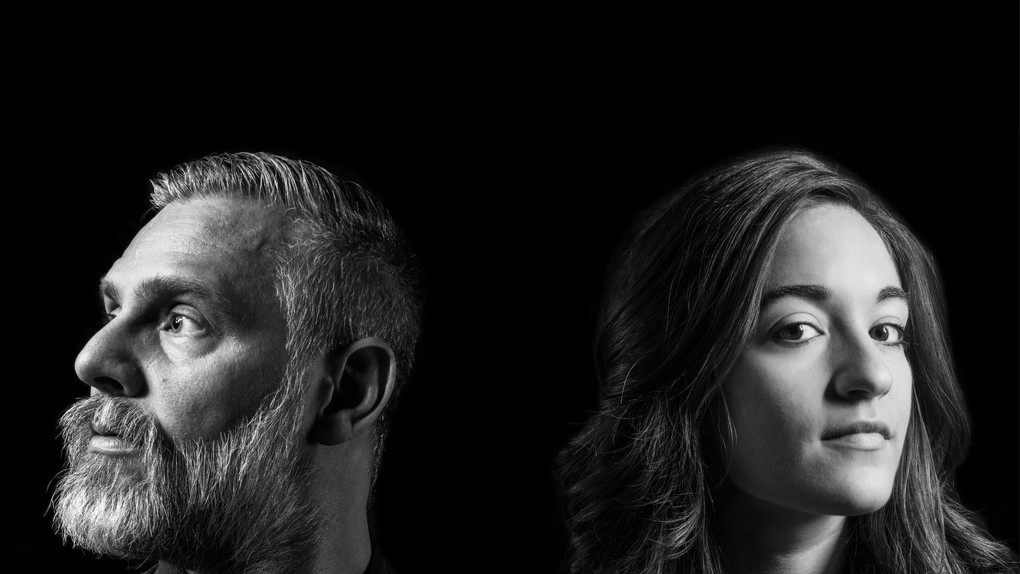 As the 90s began to wane, a late 20-something singer-guitarist Dick Prall gained fair notoriety on the Chicago indie circuit. Some 25 minutes west of his location, a much younger Kristina Priceman was well into her violin studies at the Northwestern String Academy. Whether by fate or sheer coincidence, the duo were united years later by their genuine passion for rock and roll, and formed Dickie in late 2014. In less than two weeks, the band will debut their self-titled album, and the anticipation is worth it.

Dickie (the album) plays like a road trip through the tribulations of Prall’s childhood, adolescence, and young adulthood. His memories are long faded sketches that Priceman not only redraws, but coats with fresh color and newfound depth. Now 45, Prall tells it all from the perspective of a grown adult—full of wisdom and great insight. Priceman exhibits a complementary maturity. Her violin melodies exfoliate the scars of her bandmate’s past, while also having a foreground presence that ensures their alliance. On the surface, one may compare this dynamic to that of Glen Hansard’s and Marketa Irglova’s The Swell Season. But rather than explore a short term romance, Dickie maintains a strong, enduring friendship.

Right away I thought the album’s first track, “45”, would be the single to introduce the band to the world. Besides having a catchy rhythm, it comes from someone with proven experience; both in life and in music. The song’s sundrenched guitars are contrasted with lyrics that speak of a struggling familial unity. A dramatization of Prall’s early life in a super-8 style montage would make the ideal music video. I really believe this song really has the potential to find decent rotation on pop radio, and leave a lasting, thought provoking impression on even the most casual listeners. Another track I find worthy of carrier single status is “Pop pop pop.” Sometimes, people just need that song that will both lift their spirits and inspire them. I’d consider this an anthem for those youths who face bullying and cyberbullying on a frequent basis. From the way the song builds, it allows the listener to gather courage and stand up that very threat. It has a simple, straightforward message in its chorus (“Turn and look away”) that will definitely resonate and encourage a healthy means of handling similar situations. “Change Your Mind” is the ideal song for young couples who experience that seemingly protracted period of uncertainty. The violin accompaniment on the chorus is essential in encapsulating the feeling of heartache. Whether Prall was chasing some form of validation from the other, or felt that his options have run out, he still yearns for that gleam of hope. And while time may not heal everything, he continues to move forward.

In the second group of tracks, Prall grows beyond the security of home, and desires to seek out his own space. “Happier Me” is easily a highlight from that section, dealing with his redefining of accomplishment. Moments that were once considered milestones are now seen as simple expectations in retrospect, and the inevitability of growing old comes closer into view. During that point, one must come to grips with the notion that those who were once an integral part of their life will expectedly drift away. In the song’s chorus, Priceman’s harmonies are beautifully woven over Prall’s as they sing, “Ain’t it amazing how the skin can fade?” suggesting that he has come to grips with his own mortality. The final track on the album, “In These Shoes,” has Prall accepting his flawed nature from a ghostly and aloof perspective. It effectively brings forward the idea that even those who are normally accessible are bound to become heavyhearted. Even if the album ends on a rather melancholy note, I feel solace knowing that I can relate with Prall’s life experiences.

Overall, Dickie is full of supremely crafted and masterfully executed tunes. Prall and Priceman exhibit a constant fluidity, and the listener is able to capture the cohesiveness of a collaboration done right. They have the strength to contend with popular alternative acts of the day, and may stand out for having one of the finest debut albums of this year. Although nothing is for certain yet, the band has my vote, and will most likely find a wider audience who are willing to experience music straight from the heart.

I come from a family who is passionate about all things music. I learned to sing at an early age, and by 13, had my very own Fender Strat guitar. I tried my hardest at learning all that I could. Because I was born with cerebral palsy, I had to teach myself an adaptive playing style. I learned to write and record my own music, despite these difficulties. In college, I started making great use of my writing abilities by reviewing music, as well as copy editing. I guess it's best to stick with what you know, while welcoming a fair challenge at the same time.
Previous Album Review: “House Of The Rising Sons” Eville x Zpu-Zilla x Nina Simone
Next Gallery: We Came As Romans at Warped Tour in Holmdel, NJ 07.19