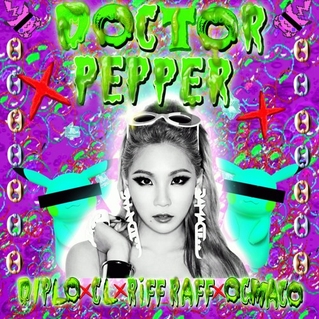 On the cusp of her highly anticipated American début, Korean rapper CL teams up with Diplo on the electro-bop “Doctor Pepper” featuring RiFF RAFF and OG Maco.

Known for his distinctive production style, Grammy Award-winning producer Diplo utilizes synthesizers and sound effects to create an assembly of melodies reminiscent of something straight out of Super Mario World. While Diplo’s beats are usually the stars of his productions, it’s CL who outshines in this Mad Decent collaboration.

With her too-cool-for-school attitude and edgy rhymes, CL proves why she’s known as the “Baddest Female” in the Korean music industry. Staying true to the signature rapping style that helped set 2NE1 apart from other Korean girl groups, CL holds nothing back on this track, throwing all humbleness aside, and unleashing a level of arrogance that is more than justified.

While traditional K-pop fans might be turned off by CL’s effort, and casual music listeners may shy away from the track, this Nintendo-inspired beat laced with the rapper’s hypnotic chants remain in your head long after the song has stopped until, before you know it, you’re unconsciously pressing play once again.

Music inception at its finest.

Love it or hate it, this Mad Decent collaboration is proof that music does not always have to be deep, nor should we always take ourselves so seriously. After all, CL created the song as she sipped on a can of Dr. Pepper after Diplo canceled a recording session with her.

So, indulge in the pleasure of this new track whether that pleasure be genuine or laced with guilt. Drink it up.

Previous Interview with 18th & Addison: “We kind of liked the challenge of having to start from the bottom again…”
Next Interview with A.D.D: “All women have encountered something like this to a certain degree…”