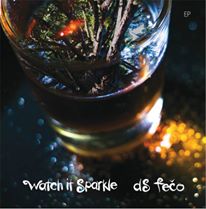 dsfečo (David Fetcho) has been making music over the course of five decades. The experimental artist tends to focus his tunes on thought provoking ideology and that doesn’t change on the new six-song EP Watch It Sparkle. The new collection of songs is not for everybody. The odd musical arrangements and vocals may steer some listeners away but for those that stick with it will find intricate and original workings with a strong message.

Using unconventional instruments such as the recorder, ocarinas and accordions, Fetcho is able to produce sounds that are completely unfamiliar to the ear. Producer Carl Saff must have hand his hands full during the making of this release especially on the seven-minute title track “Watch It Sparkle” and the first song on the EP “Not Again.” The combination of haunting withered vocals and ominous tones can be a bit distracting upon first listen but eventually turn out to be the stand out best trait on the album.

Fetcho and Watch It Sparkle are just the beginning of a song-cycle that will lead to more new music in the near future. At age 67, Fetcho still is hungry to make music that will evoke the mind and spirit. He certainly gets you to think on this one.