Home / News / New Media / From Garage Jam to YouTube Hit Series: Making Music Across The Board 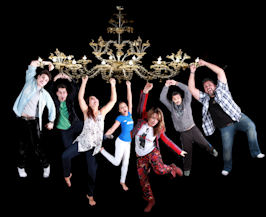 From Garage Jam to YouTube Hit Series: Making Music Across The Board

AcrossThe Board (ATB) is a Toronto-based band and creators of the weekly YouTube live music web show “Pick Up & Play”, now in it’s second year of production. Crossing through genres of rock, country, indie and pop, ATB covers, writes original songs and spends most of it’s play time online rocking it out to thousands of internet viewers!

Conceived in April, 2013 from garage jams and international collaborations, Across The Board launched its first YouTube video with one camera and a couple of toy microphones. Since then, ATB has managed to attract over 3000 subscribers to the Channel.
The talented core group of multi instrumental-vocalists all sing, all play guitar, all play drums and various other assorted instruments—videos are an interesting mix of musical chairs and acoustic harmonics reminiscent of Fleetwood Mac, Mamas & Papas and Lady Antebellum.
Known to mashup songs and combine genres with reggae breakdowns from a light rock groove (like “Secrets/Perfect Mashup” and “Chandelier”), ATB offers viewers not only great music to hear but high energy- professionally shot videos that stand out against the usual Youtube offerings of static head shots.
They recently collaborated with Marlon Chaplin for a cover of grammy winner Beck’s “Blue Moon” and with Jessica Speziale for a cover of the Alicia Keys version of The Rolling Stone’s “Wild Horses”—you can see these on their “Pick Up and Play” playlist on YouTube at http://www.youtube.com/atbmusiccanada .

Stephen Vicino is the founder of MusicExistence.com. He created this site to give talented musicians a voice and a way to be discovered.
@@svicino
Previous HOTT UPCOMING ARTIST 4-4 WATER RELEASES NEW HOUSE PARTY RECORD!
Next tUnE-yArDs live at Grand Central in Miami, FL | April 4, 2015