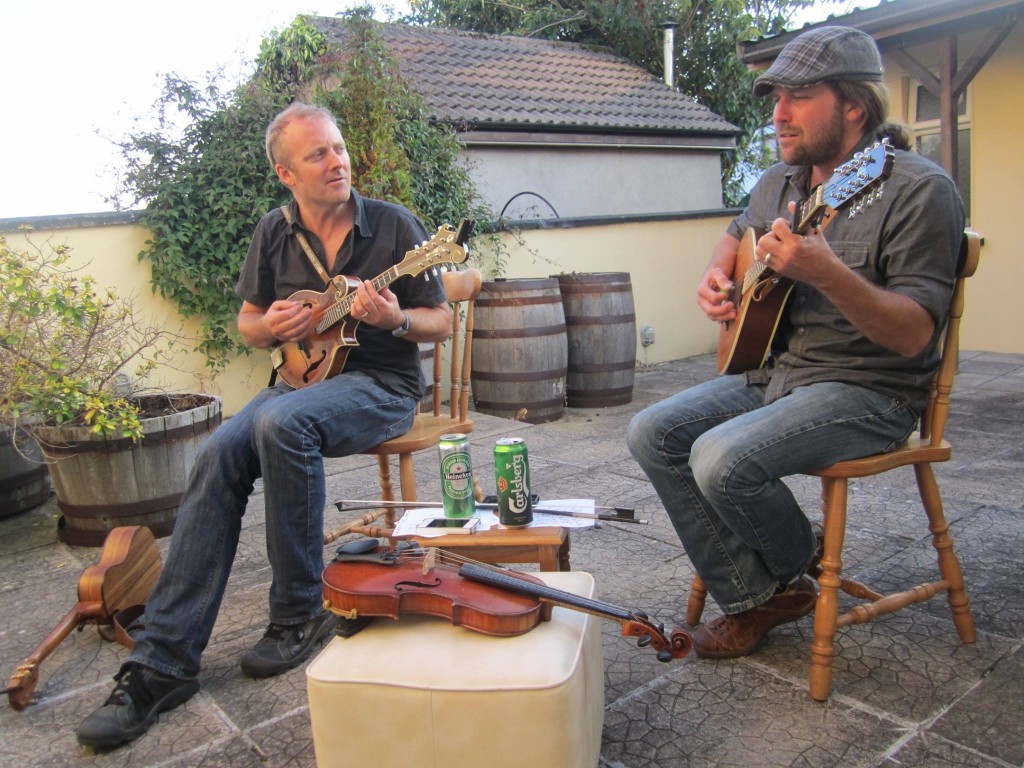 Moors & McCumber have wandered beyond good and into the elusive land of great. James Moors (vocals, guitars, ukulele, mandolin and Irish bouzouki) based in Superior, WI and Kort McCumber (vocals, keys, cello, guitars, Irish tenor banjo, Irish bouzouki, fiddle, mandolin, accordion, harmonica, upright and electric bass) based in Gold Hill, CO embrace a bigger sound than most duos. “Pandemonium,” produced by Gary Louris of the seminal band The Jayhawks, is their fourth studio recording. Recorded at Ed Ackerson’s Flowers Studio in Minneapolis. The first track on the CD, “Crack A Smile” isn’t the best song by any stretch of the word, and I was glad to move onto what’s to come from there, because it just gets better as it goes. It’s not that it opens weak, but it isn’t exactly strong either, compared to what follows and as the introduction track it doesn’t set it up very well. But that instantly changes on “You Take Me Somewhere” with its fantastic harmony vocals, it’s a completely upbeat track with a brilliant backdrop. Everyone is well in the pocket on this, and it gets things taking off from here. The string assault is awesome, as the guitar leads over mandolin and the bouzouki which is a great flavorful mix. This also enters pop in places, with the overall result having a crossover appeal. The excellence continues on “Everything” and gets even better on “No Way To Live,” which is hands down my pick for best track, it’s about being left to one’s own devices.

This isn’t just run of the mill country, it speaks volumes of other proportions in realm of soft rock and easy listening. The surrounding strings sweep the lead guitar into its element on this well arranged song. And then there is the killer guitars of “Take Me Away,” with another one of the better pieces of music on offer. This is something of the sensational variety altogether in the string section, displaying their ultimate prowess. Of everything going on here it is the strings that stand out the most. The vocals can only serve to be the icing on this numbers cake, as it truly is an epic little instrumental in its own right. The album bubbles along with the slightly more energetic “Bend Or Be Broken” which also has some lovely guitar breaks, backed again by some great upright bass. “Take Me Away” and “Buried In The Earth” are also great tracks which stand apart in arrangement from the vocals, which are mostly sung together, both very strong in chorus. Other songs worth mentioning are “My heart Is Open” which is a lighter piece with a sort of urban singer songwriter feel.

And there is “If Living Was Easy,” which contains a big blend of everything the CD is all about. It’s all about how everyone makes mistakes and still comes out clean on the other end. If I had to choose between any tracks this would be in the top three. There are twelve great cuts to chew on with a lot of variety on this CD, all one has to do is listen to “Best Of Intentions” or “All great Tragedy” and the best of all “Pandemonium” itself to fall for this release. If you don’t know their music it’s a great place to start, and will probably have you seeking their back catalog to find more of their music, its quality is as good any other currently in the genre.