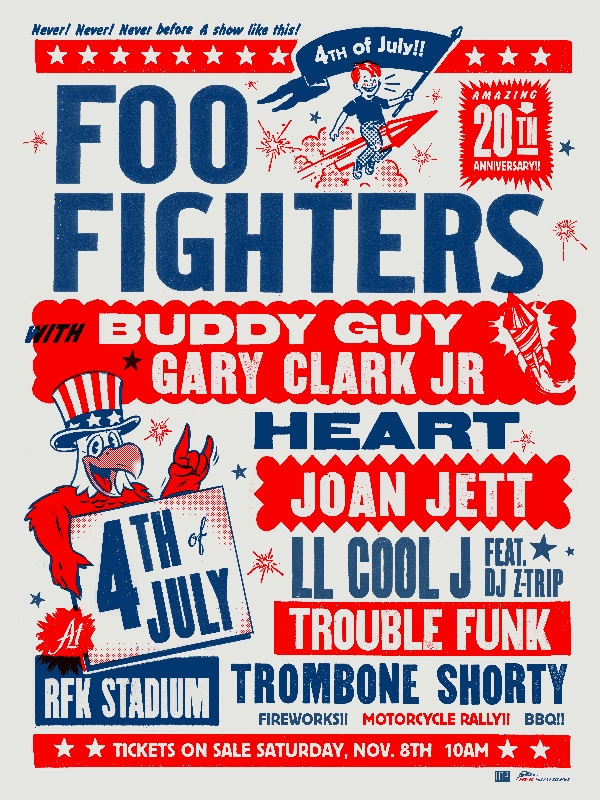 It was barely two weeks ago that Foo Fighters played a super intimate show at the Black Cat in Washington D.C., about which The Washington Post ran a review featuring the line “the Foo Fighters could have gigged at RFK Stadium instead of spending the night at a cozy rock club.”

And now, tickets for Foo Fighters’ 20th anniversary extravaganza at RFK Stadium will go on sale this Saturday, November 8 at 10am ET.

In addition to being Foo Fighters’ biggest U.S. headline engagement to date, the band’s July 4, 2015 20th Anniversary blowout will be an all-day affair and include a BBQ, motorcycle rally and fireworks display – it is the 4th of July after all.

The all-star supporting line-up features an awe-inspiring assortment of musical ambassadors of the eight cities where the new FF album Sonic Highways (out November 10 on Roswell/RCA) was recorded and the band’s HBO docuseries Foo Fighters Sonic Highways was filmed: A huge inspiration for the lyrics of Sonic Highways lead track “Something From Nothing” — not to mention guitar players through the ages –– Chicago’s own Buddy Guy will perform. Gary Clark Jr. will be on hand to represent Austin, making for a generation-spanning double shot of guitar Godliness. From Seattle, Heart is confirmed to appear, Ann and Nancy Wilson having joined the FF family for its Late Show with David Letterman week-long stand leading into the HBO series’  premiere. Representing Los Angeles with ties to New York, will be longtime FF comrade in arms Joan Jett, who recently joined Foo Fighters Dave Grohl and Pat Smear for Nirvana’s induction into the Rock & Roll Hall of Fame. Lauded New York hip-hop artist LL Cool J will also be making a special appearance featuring DJ Z-Trip. Rounding out this once in a lifetime who’s who of musical greatness will be DC hometown legends and kings of go-go Trouble Funk and, representing New Orleans, the incomparable Trombone Shorty.

So don’t forget and don’t delay: Go to 930.com 10am this Saturday. All tickets are created equal for the Foo Fighters July 4th 20th anniversary blowout, but few shows will ever create these kinds of memories. Join Dave Grohl, Taylor Hawkins, Nate Mendel, Chris Shiflett and Pat Smear and their Sonic Highways family for a show that will be talked about for centennials to come.

Stephen Vicino is the founder of MusicExistence.com. He created this site to give talented musicians a voice and a way to be discovered.
@@svicino
Previous Borgore Announces The Buygore Show Tour
Next (We Are) Nexus Interview