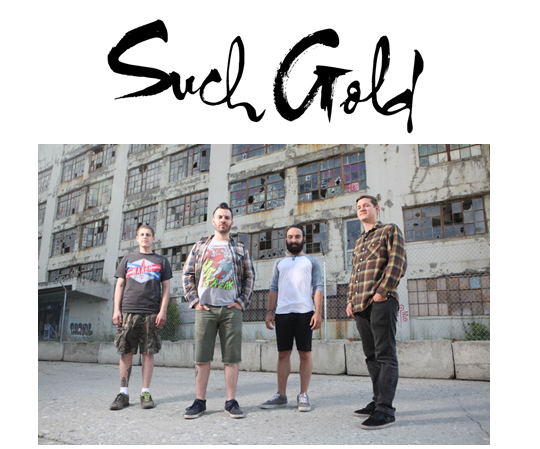 Rochester, NY based melodic hardcore punk band Such Gold have released a new song “No Cab Fare” above and fans can also pre-order various merch bundles. This is the third song released from their new studio album The New Sidewalks.

The New Sidewalk will be released on November 10th via Razor & Tie and is available for pre-order on iTunes HERE (http://geni.us/SuchGold).  When fans pre-order the album they will receive the instant grat songs “Faced” and “Nauseating.”

Such Gold are currently on road with Transit. Immediately following that tour, Such Gold will be on tour with Four Year Strong (tour dates below).

The New Sidewalk is the follow up to their 2012 debut album, Misadventures, which debuted at #6 on the Billboard Heatseekers Chart.   Their new album was produced by Bill Stevenson (Descendents, A Wilhelm Scream, Propagandhi) at the Blasting Room in Ft. Collins, Colorado. The New Sidewalk is a huge leap forward for the band creatively, with the band pushing themselves further and further away from the pop-punk scene they came up in and instead focusing on being an innovative, forward-thinking hardcore punk band even if it brings some tension to the listener. The album twists and turns, divebombing from riff to riff as time signatures switch up almost on a whim.  Keys and textures change with an unrelenting dynamic intensity.

Tags No Cab Fare Such Gold The New Sidewalk

Stephen Vicino is the founder of MusicExistence.com. He created this site to give talented musicians a voice and a way to be discovered.
@@svicino
Previous Metronomy | October 15th, 2014 | The Mohawk, Austin, TX
Next Crowbar Debuts New Music Video, More Tour Dates

FOUR YEAR STRONG ANNOUNCES “THE GO DOWN IN HISTORY TOUR”