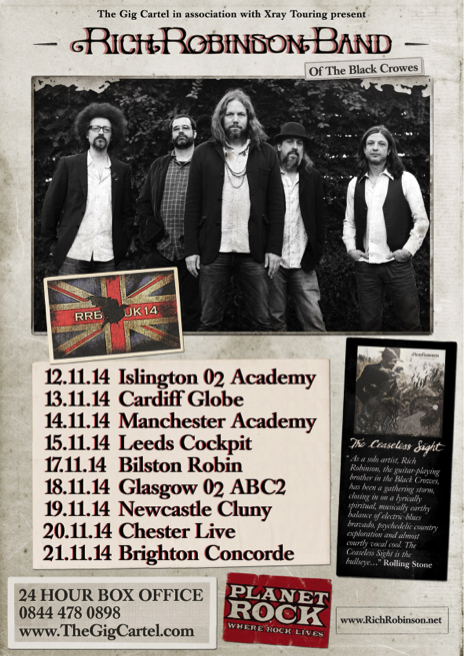 Rich Robinson has just released his third full-length studio album The Ceaseless Sight via The End Records/Circle Sound and is now set to return to the UK this November for a full regional tour presented by Planet Rock.

As co-founder of the seminal rock act – The Black Crowes, and having sold well over 30 million albums throughout a career that spans over 25 years, Rich has nailed the mark on this record offering the kind of crossover potential that appeals to a country /indie audience as well.

On The Ceaseless Sight, Rich reminds us that it all comes down to the song, and among some of the great electronic music which relies heavily on technology, there’s still a place for organic, stripped down songwriting and storytelling.

Rich’s first single from the album ‘I Know You’ has been added straight to the B-List at Planet Rock also – Video here:

Amongst general sale tickets, there will be a VIP package available including:

Following an extensive USA headline tour, Rich Robinson is travelling back to the UK for the following dates:

Pre-sale tickets are available starting July 30th at 9:00am and on general sale from August 4th at 9:00am.
http://www.eventim.co.uk/tickets.html?fun=erdetail&doc=erdetaila&erid=1233052&affiliate=ROK

Stephen Vicino is the founder of MusicExistence.com. He created this site to give talented musicians a voice and a way to be discovered.
@@svicino
Previous (We Are) Nexus Release ‘Better Off Without You – The Remixes’ EP Feat. Dave Audi & Jump Smokers
Next Lunatic Soul streams “Walking On A Flashlight Beam” for fans ahead of release