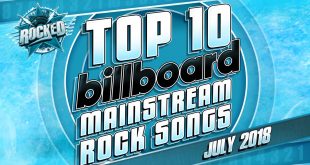 A look at the top 10 songs on Billboard’s Mainstream Rock Chart. This video covering the week ending July 28, 2018. Mainstream Rock is a music chart in Billboard magazine which ranks the most-played songs on mainstream rock radio stations, a category that combines the formats of active rock and heritage rock.