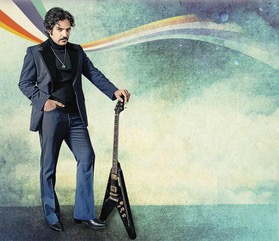 “The Funky Papu EP is the first time I’ve been able to express, on record, some of the more “pop” sounds I loved as a kid, before becoming a musician and knowing how the sauce is made,” explains Moezzi.

The songs on Funky Papu journey through melodic navigations and establish Moezzi’s voice as an artist. Throughout the set of songs, he pays homage to the pop sounds of his youth as he blurs styles and jumps genres with powerful vocals that add that extra honest touch to the songs. “It’s about integrity more than form. If something is displaying a vulnerability or honesty, I don’t care so much what dialect or language it’s being communicated through,” shares Moezzi.

Born in Tehran, Iran to a Persian father and an Italian Mother his family fled when Moezzi was four years old, he grew up in Salinas, CA, and attended college in Washington DC. His lifelong love affair with music was sparked by sneaking into a BB King performance as a kid and mentoring by a member of Richie Valens’ family from the Backyard BluesBand. He was the bandleader and guitarist for legendary blues singer MissMickey Champion and time spent with the Los Angeles music collective The Beachwood Rockers Society. The now Los Angeles based artist continues to be inspired by a diverse mix of musical cultures and styles.

Stay up to date at https://www.facebook.com/johnnymoezzibandpage

Stephen Vicino is the founder of MusicExistence.com. He created this site to give talented musicians a voice and a way to be discovered.
@@svicino
Previous MY LIFE WITH THE THRILL KILL KULT Announces Spring 2023, EVIL EYE TOUR with Special Guests ADULT. & KANGA!
Next Daisy Jones & the Six Announce Debut Album ‘Aurora’ + Release Lead Single “Regret Me”