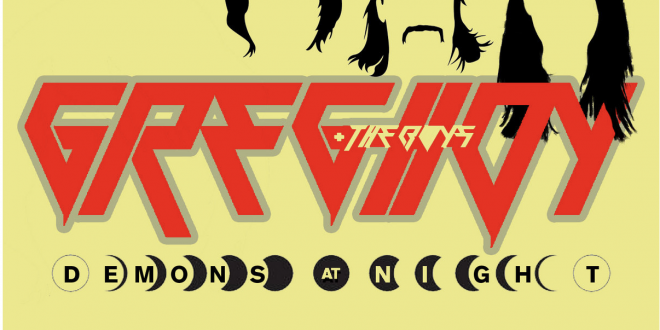 Though its cosmetics suggest a campiness I would have never picked up on if I had listened to the single exclusively, there’s something very rebellious about Greg Hoy & the Boys’ “Demons At Night” music video that I was immediately taken with in my initial sit down with the release this week. Cut this past November to a warm critical reception and picking up momentum this month as well, this latest cut from Greg Hoy’s three-piece outfit is one of tremendous sonic weight per the usual, and yet it could be one of the leanest indie rockers I’ve listened to in the better part of the last year thanks to its simple compositional structure.

The music video for “Demons At Night” is simple but bright, taking themes within the song that extend well beyond what the words could ever impart to us on their own without sounding flaccid, and were it adorned with anything other than the casual attributes it was, I don’t know if it would feel as tight as it does in this instance.

The plastic-wrapped guitar parts we normally find stripped clean of any impurities are not present in this piece as they do nothing for the overall narrative; their synchronized movements give the melody so much more tension than I would have expected to find here, and the song feels more intriguing as a result.

Although abrasive in a couple of key moments, Greg Hoy & the Boys’ “Demons At Night” makes for some of the most compelling and provocative independent rock I’ve come across as a music critic in 2022, and if you haven’t already, you need to see what I mean for yourself as soon as possible. Nothing is holding this act back from assembling something really over the top and conceptual in this release, and thankfully, Hoy and his band are using every resource of natural origin at their disposal in doing exactly that. I’ve loved what these guys have been able to do in the past, and they’re holding to their standard in this performance quite marvelously.

Previous 30 Groundbreaking Albums Celebrating Anniversaries in 2023
Next Single Review: Jim Peterik – “All That’s Mine To Give”