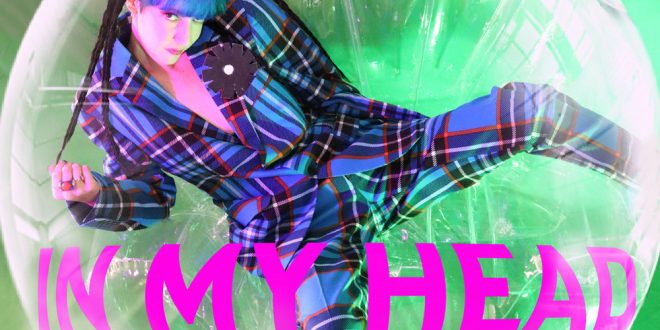 Hard pop as we used to know it in the ‘90s is experiencing a major comeback right now, and you don’t need to look past the music of artists like Pigtails to see exactly what I’m talking about. Pigtails has a voice that would probably work as well in a pop setting as it would in something with a little more rock behind it, but her commitment to the experimental aesthetics of the former makes her quite qualified to join in a growing trend. “In My Head” might not teach us anything about the virtues of smart pop songcraft, but it introduces a rich talent at any rate.

There’s no questioning who Pigtails’ influences are in this performance because she makes it quite clear who and what era she worships as a musician, but I think that was the point of this track and its video. She wants to show us who she’s learned from the artistic path she’s followed as opposed to trying to guess who she is or what she wants to be – in all actuality, she doesn’t even know the answers to such questions yet (and it’s obvious in her zealous execution from one verse to the next).

The lyrics here have a depth that immediately grabbed my attention and felt like the trappings of a surreal poet far more than they did the casual verses of an up-and-coming pop star. There’s not a doubt in my mind that when she’s telling us she’ll do whatever it takes to make this tension hanging over us in the air last as long as possible, she means it, and I believe I know exactly what her objective truly is in “In My Head.” It’s charging after the medium itself, and her devotion to it is made pretty clear right out of the gate in the song and video the same.

“In My Head” is not without a punky undertow you might not notice at first glance, but overall I think that the woman who is behind its magic is an artist everybody needs to get curious about this month. Pigtails is developing who she is as a player and where she belongs in the indie hierarchy, but a performance like the one she gives in this single and the visual document it inspired indicates a slew of possibilities waiting for her tomorrow. I have a feeling we’re going to learn even more about her strengths in her next release, and everything in this single says she’s only going to get better from here.