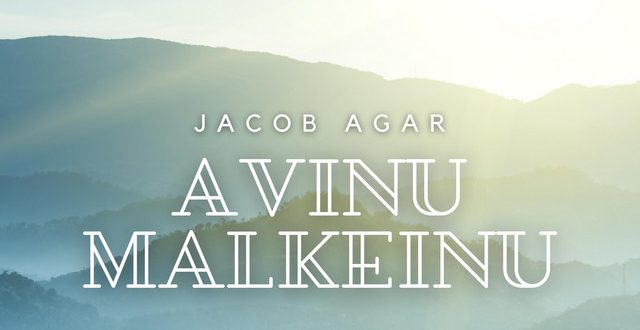 Though driven by a heavy-handed melody that could crush just about anything that gets in its path at the right volume, the instrumentation behind the vocals in Jacob Agar’s powerful new single “Avinu Malkeinu” is undeniably a product of simplicity over lusty excess. The rhythm is subtle and the harmonies are gilded, but if pressed to pick one star above all others in this performance, it’s Jacob Agar herself, who displays a lot of self-control with the mic in his hands and sets a good example for some of his younger contemporaries trying to make their own mark in the religious genre today.

There are a lot of classical elements in this single that I was not prepared to be as moved by, and truth be told, I think they hold a lot of potential for this next chapter of his career.

His emotions are on his sleeve in every moment of this track, but it’s only through the power he puts into his words that we’re able to absorb the passion behind each verse. “Avinu Malkeinu” wouldn’t have been the same song without Jacob Agar in the studio directing every component of the composition, and that’s clear even in the most cursory of listening sessions spent with this track or its video.

A smart classical vocal crossover that suggests a great bevy of work may be on the horizon for this artist, Jacob Agar’s “Avinu Malkeinu” is a provocative listen that takes his branding into the next decade of pop dressed to impress. 2022 has thrown us a lot of curveballs, particularly with regard to live music and the vocal pop standard, but judging from the swagger he’s got in this most recent release, I would have to say that Jacob Agar is going to come out of this year with a lot more successes than sorrow.