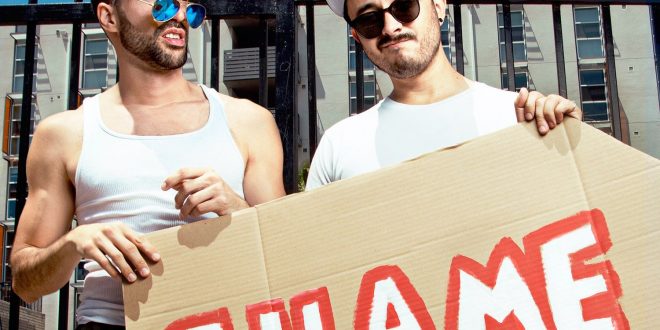 Migrant Motel delivers a stunning fourth single in “Shame,” the latest in a string of intriguing releases to bear the twosome’s name in the byline, and the buzz isn’t about the potency of the hook it features alone. “Shame” fuses the emotive lyrics of modern pop with reflective, almost atmospheric rhythm, soulful vocal harmonies, and a brittle synthesized backdrop that is startlingly expressive, despite its limited reach in the master mix. There’s something to satisfy everyone in this incredibly well-rounded single, and though 2022 has yet to disappoint hardcore pop fans, I must admit that this rookie release from Migrant Motel stands up with the very best that I’ve heard out of any scene in North America.

Instrumentally speaking, “Shame” is a remarkably stirring composition that puts a lot of emphasis on organic tonality (a bit of an oddity among synthesizer-driven pop music these days). The synths create an unmistakable sense of yearning that the vocal track will spend the better part of the running time trying to comfort, and while their contrasting colors yield a surreal finish for the song, they don’t water down the mainstream accessibility of this single at all whatsoever. On the contrary, I think that “Shame” sounds all the sexier this season, which by and large has featured a much more streamlined look among pop musicians than what Migrant Motel is producing here. This is a uniquely stylish offering, and better yet, it doesn’t feel even slightly derivative nor tethered to some larger movement within the industry today.

There’s no real climax in this song, but that doesn’t mean there’s no catharsis. From the moment that the music gets started, we’re met with a relaxed vibe that extends itself over the entirety of the track. There isn’t so much an ebb and flow to the percussion as there is a steady flow of tender beats, which makes the transition into the chorus perfectly seamless. We’re never challenged to contemplate the lyrical narrative, and though the centerpiece hook is memorable and swinging, it doesn’t grind with the same intensity that a more contemporary compositional linchpin would. Songwriter David Stewart is putting a lot of time and effort into making the material that his new project is pumping out as personalized and unrecycled as possible, and it’s resulting in some seriously premium content – to say the least.

I cannot wait to hear more from Migrant Motel, and if you haven’t already, I highly advise taking a peek at this particular track the next time that you’re in the market for new music. Like “Shame,” the other material that I’ve heard from this duo in the past five years is equally stimulating and aesthetically communicative, and even though the winter is far from over, I have a feeling that the splash they’re making right now is going to be one that we end up talking about well into 2023. This is an unparalleled time for independent music, and Migrant Motel is keeping up with this increasingly fast-paced period for pop culture amazingly well.