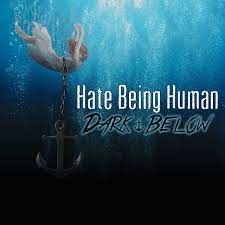 erupts from the speakers and instantly fills the air around us with an overdriven but surprisingly melodic riffing that will serve as the backdrop to every cathartic moment this song has to offer.

There is no instrumental introduction, no slew of bombastic string-born solos, nor any powerhouse electronic lightning to signal a futuristic vibe here; when the guitars plow through the silence and into full-color stereophonic sound, they’re immediately joined by a lead vocal from Josh Campbell that is as cratering as any of the instrumentation is. Campbell has no time, nor any room, for filler in “Hate Being Human,” and while he, Koldan, and bassist Josh Grove’s Dark Below project has been stirring up a lot of buzz in the underground lately, they live up to the hype and then some in this potent alternative rocker.

The singing here has far less of a sting than the guitars do, but the direct contrast between the two components is essential to appreciating the compositional dexterity present in this track. As we close in on the first chorus in “Hate Being Human,” there’s an angst-ridden tension starting with the vocal that bleeds into the harmony with the fretwork, as if to create an emotional swell amid an otherwise robotically consistent rhythm. Aesthetically, I think Dark Below is telling us as much of a story via the construction of this song as he is through his sleekly-arranged lyrics, the best of which are reminiscent of classic grunge ala Soundgarden.

I haven’t said this very often in 2022, but there isn’t a thing I would change about the way this track was mixed. Every element in the music gets a share of the spotlight at some point or another; the drums sync together the grooves with similarly stylish harmonies at the start of the song, Grove’s bassline gets a little extra boost from behind the soundboard in the chorus (dramatically upping the physical nature of the hook), and even when Campbell’s vocal isn’t quite as brutish as guitars are, they never seem disproportionately arranged here. Some hard work went into making every part of “Hate Being Human” fit into place, and I think that’s obvious even to the most novice of critics.

In true old-school alternative rock fashion, Dark Below’s new single comes to a conclusion much as it starts – instantaneously and free of the overblown fireworks too often littered across modern pop and hard rock alike. Though there are plenty of fun indie tunes debuting in 2022, I think that rockers are going to want to get ahold of this track the next time they’re in the market for new music because, to be frank, it’s one of the few songs of its genre I’ve heard this season that hasn’t felt forced or somehow uneven in style. Sonic hybridity is all the rage in America right now, but for Dark Below, staying true to a classic model is producing some pretty awesome results in “Hate Being Human.”