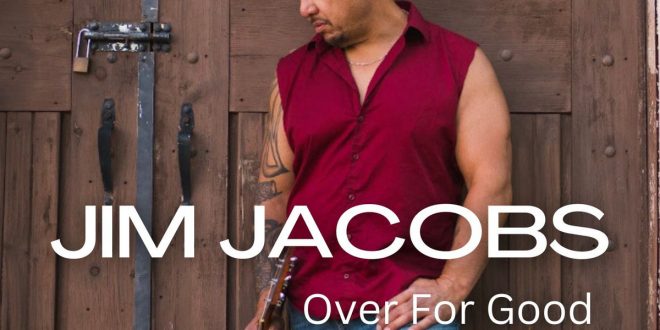 Both textured and in possession of a dirty melody as resonant with the narrative as any of the vocal delivery ever could be, the guitar parts in Jim Jacobs’s new single/video combo “Over For Good” are certainly a commanding force to be reckoned with. Split between the verses with a nonetheless dominant presence in the grander scheme of things, the string play we hear in this track is undisputedly as potent as it gets, but as powerful as it is, it’s still not the centerpiece of “Over For Good.” Jim Jacobs hasn’t been in the spotlight for very long, but already he is working hard to make sure there isn’t any question as to whether or not he can insert a lot of true emotionality into this music – and not just through a familiarly Nashville brand of lyrics alone.

As charming as I find the instrumentation to be, there’s no shaking the fact that “Over For Good” is a vocal-driven single. The voice that bellows from beneath the blanket of pastoral gold here is absolutely the primary linchpin in this composition, and although it’s supported by a grand backing in the arrangement, I don’t think this would be quite the same song if you were to put a different singer behind the microphone. It’s a signature piece, a statement release if you will, and by all critical measurements a defining moment that tells us almost everything we need to know about how this artist is going to go about writing and recording his upcoming work.

The music video for “Over For Good” is a splendid document if you like the rustic feel of vintage country melded with an aesthetic sourced from a style of humble crossover singer/songwriters that predated this new millennium, but I wouldn’t call it a straight-retro piece of material at all. There’s nothing overwhelmingly intellectual about its imagery, but there’s a sense of deeper, unspoken truths being shared with us in the connectivity between audio and visual stimulation here. It’s a deep thinker’s strain of country for sure, and definitely something that has the potential to cause quite a bit of chaos if it catches any sort of momentum from mainstream audiences before the year has come to a conclusion.

Country fans who prefer evocative poeticisms to the raw honky tonk of yesteryear need to give Jim Jacobs’s new single and its music video a close look this winter, mostly just to find out why he is joining a pool of the frequently talked-about indie artists to make waves at the end of 2022. There’s a big void near the top of the country hierarchy at the moment that was once filled by some of the greatest giants to have ever entered the game, but something tells me it isn’t going to remain vacant for very long. Independent players like these are ensuring that the 2020s are going to be a lot more exciting for country’s most faithful fans than the 2010s were, and if you follow the genre, you know this is not a small statement to make.

Previous Fairshake Has Released Their Newest Track
Next Single Review: The Sound of Monday “Keeper of the Mood”