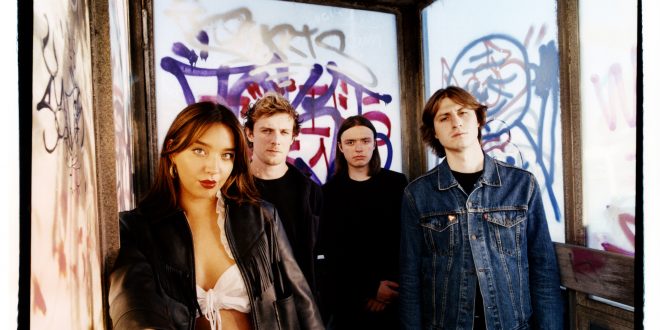 2022 was a rich year in new artists on the rise and plentiful buzzworthy releases. Listed below is Music Existence’s Artists to Watch list for 2023. The following bands have spent the past year returning to hectic touring schedules, garnering new audiences, hitting it big on streaming platforms, and prepping for an even bigger year ahead. These are the artists you will want to have on your radar.

Liverpool quartet The Mysterines had a groundbreaking year as they emerged from the underground UK rock scene. Their debut LP Reeling was released this April and instantly created buzz with their upstart punk sound that exudes Hole-meets-PJ Harvey nostalgia. Following its release, the band embarked on their first ever North American headlining tour, as well as supporting slots for AWOLNATION.  2023 will find them expanding on this joyride as they prepare for the highly coveted opening act slot for Arctic Monkeys on their UK stadium tour. With a brooding presence, sultry vocals, grunge sound and effortlessly cool appearance, The Mysterines are a name you should have on your radar.

The newest project of singer Jacob Slater, Wunderhorse is a four-piece rock outlet based in Cornwall, England. Their debut album Cub was released in October, after nearly eight years in the making. Getting his start at seventeen in punk band Dead Pretties, Slater shelved many of the songs that didn’t quite meet the band’s hardened image, and later revived them for Wunderhorse (“Leader Of The Pack” and “17”). Cub is the coming of age story as Slater shifted paths; it embraces growth, heartache, and the emotions encapsulated in affirming identity. After finishing his work on Cub, Slater made his acting debut playing Sex Pistol’s drummer Paul Cook in the FX miniseries, Pistol.

Sonically the album shifts from moments that call on Radiohead or Springsteen, then jump to folk or blues inspired compositions. It is compelling and authentic, showcasing the wide range of life experienced by Slater in the eight years of its timeline. Wunderhorse has received praise from notable British acts in the same musical space, including Sam Fender and Fontaines D.C., whom he supported this fall (marking Slater’s first ever American tour.) The cohesive blend of styles and high ambitions across Cub make it an impressive solo debut and unleash Wunderhorse on a high trajectory.

After cutting her chops opening for emerging acts like Declan McKenna and Samia, Annie DiRusso embarked on her first ever US Headline tour in 2022 and has released a number of buzzworthy singles. The Nashville-based indie rock artist was born in NYC and proudly wears the influence of both of these cities on her sleeve. Effortlessly blending fuzzy garage rock guitars and high-energy performances with a pop-infused flair, her choruses are as catchy as they are deeply relatable. The dry humor encompassed in her lyrics speak to the souls of twenty-somethings everywhere, and further establish her as an emerging singer-songwriter.

With impressive streaming numbers for tracks like “Coming Soon,” “Infinite Jest,” and “Don’t Swerve,” fans are highly anticipating the announcement of Annie’s debut full length album. Will 2023 be the year it is finally released? We think so. In the meantime, we can obsessively watch her newest videos for singles “Nauseous” and “Call It All Off”.

Daisy The Great may have started out as a fictitious band, but they are very much the real deal. Led by the beautiful, blended harmonies of Kelley Nicole Dugan and Mina Walker, the duo enchant with their folk-inflected indie pop. The pair met as acting majors at NYU’s Tisch School of the Arts, and after graduating began writing a music together about a band called, you guessed it, Daisy The Great. They’d written the manuscript and were transitioning to the score before realizing they could bring the band to life themselves. As a result, the duo grew into a six-piece and have released a full-length debut album, I’m Not Getting Any Taller, in 2019, an acoustic EP, and their 2022 sophomore LP, All You Need Is Time. Skillfully combining soul bearing truths with a distinct playfulness, they’ve attracted a devoted following. In the summer of 2021 they teamed up with AJR to re-release their viral hit “The Record Player Song,” garnering streaming numbers over 40million. In 2023 they will spread their glorious harmonies across the States as they hit the road of their first headlining US tour.

Drawing influence from the 2000s pop-punk bands she grew up idolizing, Massachusetts-native Charlotte Sands is revolutionizing the current landscape of the style she has always loved. First gaining online attention early into the pandemic on TikTok, Sands wistfully asked that artist Yungblud have her open for him on tour, a wish that was granted in early 2022. Whether it’s on collaborations with Taking Back Sunday , The Maine, MOD SUN, or Sleeping With Sirens, Charlotte Sands is making her name one to remember.

Two weeks after graduating high school, the singer moved to Nashville and has been there since. With folk inspirations like Bonnie Raitt and Grace Potter, Sands pens tracks that are lyrically focused and electrically charged. Her song “Dress,” written as a direct response to conservative comments and negativity surrounding Harry Styles’ Vogue cover where he adorned a Gucci dress, has amassed over 1.3million views on TikTok. “I love the way you wear that dress / Making everyone upset / Burning that cigarette, boy / Swear to god I’ll confess, boy,” she sings on the track as she urges listeners to redefine to perceptions of masculinity. Meshing alt-pop sounds with just the right amount of angst, Charlotte Sands has found her voice, and it is one that will be blaring anthemic tracks and more viral hits into the new year. You can catch her on a European tour supporting PVRIS at the starting of 2023.

Jordana Nye, better known simply by her forename Jordana, is a pop musician that was first signed to Grand Jury music when she was only eighteen years old. Now twenty two, the New York based songwriter has proven her ability to shape shift multiple times throughout her short career. First getting her start with DIY indie folk on her debut LP, Classical Notions of Happiness, she swiftly transitioned into bedroom pop on her followup, Something To Say To You and continues to lure in listeners on her chameleon-like musical endeavors. On a collaboration with dreamy indie rockers TV Girl, Jordana ventured into another new style, and continues to morph into various versions of herself on each new musical quest. On her latest EP, I‘m Doing Well, Thanks for Asking, the singer channels into deeply personal narratives, as she submerses herself into a lo-fi, folk tinged garden where she blooms in her brightest colors yet.

Jordana has continuously received high praise from critics and her own peers with each new release, establishing her as one of the quickest raising singer-songwriters out there right now. Her heavy output of music and ability to ebb and flow in and out of genre is impressive, yet more importantly, consistent. You can catch her on her first ever headlining US tour early in 2023.

One of the most viral tracks of this year belongs to up and coming singer songwriter, Lauren Spencer-Smith. The nineteen year old originally got her start as a contestant on the 18th season American Idol in 2020, but it is TikTok where she got her true start as an artist. Her first single “Fingers Crossed” began as drafts the singer posted onto TikTok, before blowing up and charting all across America, Canada, and the UK. Drawing instant comparisons to last year’s hottest new sensation, Olivia Rodrigo, Spencer-Smith is aware of the hype, but unafraid to do things her own way. Other recent singles “Flowers,” “Narcissist,” and “Single On The 25TH” set up her to be a force in the indie pop world.

Non-binary alternative artist Mothé, pronounced ‘moth’, released their highly anticipated debut album I Don’t Want You To Worry Anymore this April via their own label, Slowlab Records. The 12-track LP explores themes of trauma, healing, and optimism, bundled carefully into a thoughtful and intentional body of alternative pop soundscapes. After spending years as a touring guitarist for rock band The Wrecks and cutting their teeth in the LA music scene, Mothé, the project of musician Spencer Fort (they/she), is cultivating their own identity and promoting inclusivity in their music. Their singles “Debt Collector” and “It’s Okay To Be Lonely” garnered millions of streams and 55k+ monthly listeners, signaling big things to come from the independent artist. Following the success of their debut album, Mothé has also released a number of catchy singles (see “photobooth” and “Happy”) that will likely earworm their way into your head for days. With a high volume of musical output and many tour dates on the horizon, Mothé has established themselves as an impressive new alternative artist on the rise.

Twenty year old singer songwriter Lexi Jayde has made a name for herself on screen as an actress, and on her latest musical projects. Beginning writing her own songs at the age of six, she began recording in studio at nineteen and signed with APG in 2021. Her 2022 hit single “drunk text me” has amassed over 17.2 million streams and received praise from FINNEAS, Zane Lowe and more. Co-produced by Alexander23, the song went viral after Lexi teased its demo on TikTok in late November 2021, with over 7 million total views on the sound to date. Following its release, Lexi hit the road opening for Griff west coast tour dates, before headlining her own shows in fall of this year.

She released her debut EP “a teenage diary” in July 2021, and her second EP “close to closure” in 2022. Boasting over 2+ million followers across social media, Lexi Jayde has created an ever-evolving sound that immerses listeners in the world of the average teenager discovering themselves. She is also enrolled at The University of Southern California where she is earning a BA in Drama, establishing herself as a multifaceted performer.

Combining ferocious riffs with blustering grooves and howling vocals, BRKN LOVE is defining a new era of rock. Toronto-born singer and guitarist Justin Benlolo dropped out of school at 16 with the goal of making it in music. After a move to New York City, he eventually found his way to LA where the band now resides. Justin began tracking demos shortly after his move to the US and recruited Joel Hamilton (Highly Suspect, Pretty Lights) as his producer. Together, they cut 11 tracks that would comprise their debut album as the band landed a deal with Spinefarm Records. Their self-titled debut was released in 2020 to high praise. Following its success, Black Box was released November 4, 2022, growing the band’s fan base and launching them as a breakthrough act of the year. Opening for notable bands like Badflower, Papa Roach, The Blue Stones, and Dead Poet Society, 2023 will surely greet the band with new opportunities and an even bigger following. BRKN LOVE represent a new era for rock music that’s as powerful as it is emotional, and are proving themselves as a force to be reckoned with.