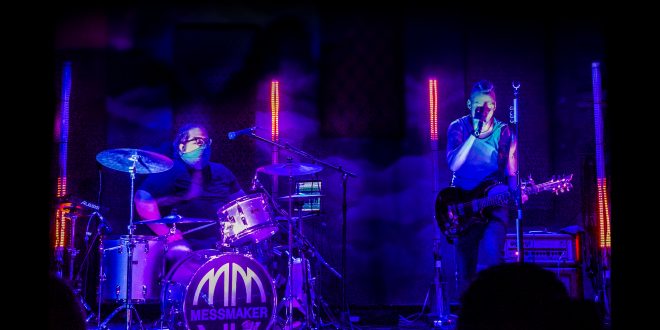 Cleveland, OH – Alternative Indie Rock duo MESSMAKER has released its newest single, the slickly produced, anthemic modern rock track “Paying Attention”. Lyrically, the song is a call to arms of sorts, all about not shutting yourself off from societal issues, but facing them head-on.

Of the track, MESSMAKER says “ ‘Are you happy with the way things are? Or are you paying attention?’ That’s the question we’re asking with this song. Today, more than any other point in history, the injustices and inequities baked into the human experience are on display. Yet so many people – and we certainly don’t exclude ourselves from this criticism – find it easier to close our doors and try to shut it all out. But things don’t get better if you ignore them.

It wasn’t the original intent when writing it, but we realized that this song is kind of directed to that cartoon dog sitting in the middle of the flames saying “this is fine”. We’d love to hear that pup’s thoughts on “Paying Attention”!

“Paying Attention” sees MESSMAKER’s Michael McFarland (lead vocals and guitar), and Freja McNeal (drums, samples, and vocals), joined by Eric Bertagnolli of Eric Bert Audio (Percussion, Co-Producer, Mixing & Mastering Engineer) and Steven Charles (Co-Writer). The duo is planning a musicvideo for the song out soon.“Paying Attention” is now available across all major streaming platforms. MESSMAKER has also released a lyric visualizer to go along with the single, which you can watch below.

Aggressively catchy melodies pair with soul-filled lyrics in MESSMAKER’s refreshing take on indie rock. Lighting up stages as a power duo, musical architect Michael McFarland and versatile percussionist Freja McNeal bring the energy of an arena show to every performance. Garnering comparisons to acts such as Panic At the Disco and Bastille, McFarland’s songwriting is frank, expressive, and clever, and joined by McNeal the Cleveland, Ohio-based act elevates the material on stage with a seemingly inexhaustible energy. Showing a maturity of style and sound that has developed through years of travel, relationships, heartbreaks, and reinventions, MESSMAKER’s music contains talent, passion, and lyrics that come from the heart. The result? A big, bright, and lovestruck slice of anthemic indie rock.

Michael’s amiable yet commanding presence on stage arose from years of experience paired with diligent study. He began performing with bands at age 14, accumulating ample experience under stage lights while still a teenager. Later, while pursuing his degree in Visual Communication at Kent State University, McFarland spent countless hours studying performance footage from any source he could find, from classic rock acts to modern pop stars. When it comes to songwriting, McFarland shows the same attention to his craft, which in 2022 earned him the Nashville Songwriters Association’s recognition as “One to Watch”. “I listen to a lot of music I don’t necessarily like,” says McFarland, “because I want to understand why the songs connect with their audience.”

A lifetime of attentiveness and continued learning has taught McFarland how to use MESSMAKER’s lyrics to tug at your emotions and leave you feeling like you’ve found a kindred spirit. When joined by Freja on drums, samples, and backing vocals, those songs expand effortlessly to fill concert halls. Whether you see MESSMAKER perform in a basement or a stadium, you can expect the lights, sounds, and raw energy of a world-class rock show.