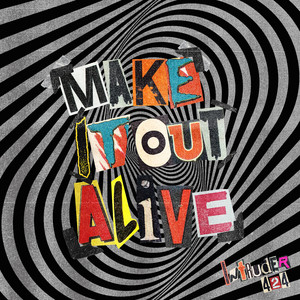 Warm and as pulverizing as its name would imply it could be, the Intruder 424’s new single makes certain that the balance between vocal and instrumentation is always the focal point of the track, and in a work like “Make It Out Alive,” this is more than reason enough to give the band’s latest release a close examination this fall. Strutting forth from the silence on the back of a slightly countrified groove, this up-and-coming crossover indie hard rock outfit laments the genre’s generational losses of the era with a bright, stirring command of the harmony in this track and, for critics like myself, they make it all the more difficult to dismiss their sound as a passing fancy.

The guitar in this song has a great sizzle that puts a bit of an edge on the main melody here, but I don’t think it ever grows so hot that it distracts from the primary focus on the lead vocal at all. On the contrary, nothing is competing for our affections in “Make It Out Alive,” but instead working towards a common goal of imparting solidarity and kinship unto anyone who happens to be within earshot of the music. It’s selfless songcraft, and ironically it’s being utilized to promote a selfless attitude in the era of look-at-me indie rock.

“Make It Out Alive” is supported by a music video as stripped-down and barebones as they come (outside of the minimalism movement), zeroing in on the natural chemistry Intruder 424 has even when they’re giving us this performance from a distance. Not even an implied barrier can stop these players from connecting with one another to make some smashing music all the more intimate here, and amidst the difficult times we’re living in at the moment, I think there’s something especially inspiring about a performance like this one. Music is bringing us together even when the notion of togetherness seems out of reach, and to this end, Intruder 424 deserves a lot of praise this October.

If you like vocal-powered melodicism with a tonal punch and a multilayered compositional bend to it, “Make It Out Alive” is a song that you need to be listening to at the moment. Intruder 424 doesn’t hide their skills from the world in this release but instead exploits their gifts for everything they’re worth, and given the circumstances, I don’t know that this blossoming sound could be arriving in record stores at a more optimal moment than the present. I’m very impressed with this band’s potential for growth, and something tells me other listeners will be as well.