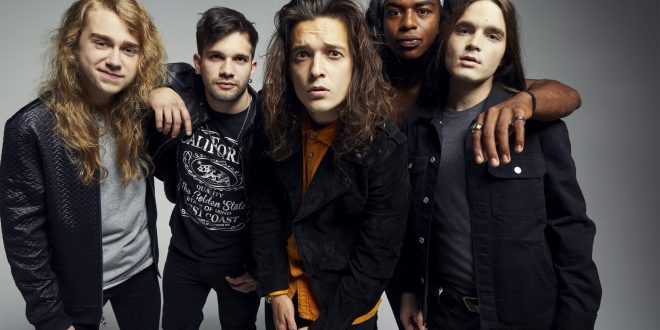 Los Angeles based rock band Classless Act are proving their versatility and readiness to show the world who they are. For the holiday season, the band are treating fans to an unplugged take on five of their amped-up anthems originally heard on their 2022 debut album. Launching a series of acoustic versions of the record’s hit singles, a new song and video are scheduled to release every two weeks, culminating in a five-song collection, Welcome To The Acoustic Show, out on December 16. Consisting of Derek Day (vocals), Dane Pieper (guitar), Griffin Tucker (guitar), Franco Gravante (bass), and Chuck McKissock (drums), we had the pleasure of speaking with Derek and Franco about the new release showing a different side to Classless Act and the exciting year they’ve had. With personal invites to appear on summer 2022’s highest grossing tour, The Stadium Tour, as well as the Taylor Hawkins tribute and Aftershock festival, Classless Act are quickly becoming a next-generation defining act.

Classless Act first introduced themselves to audiences in 2021 with the release of their debut single, “Give It To Me”. Both their debut album and the upcoming EP kick off with the self-referencing, eponymous track “Classless Act,” which acts as the band’s personal opus. Considering it their formal introduction, Derek says, “We wanted to say hey, we’re here, we’re loud, we’re ugly and dirty and we don’t shower, and we scream, but we have something to say simultaneously. Really Welcome To The Show is like telling the whole world to join us, be in our band, that kinda thing. The cool thing though is that once you venture into the album more, you kinda hear like ‘oh, it’s not really much like this type of rock n roll. It’s maybe this kind, or that kind or whatever.’ You really gotta run out of the gate screaming to let people know you’re there, and then you get to explore the space, I suppose.”

When it came to tracking these already beloved tracks acoustically, the process in which the five-piece recorded them was true to their distinctive and well-equipped nature. Reworking songs that are already beloved by fans is no easy feat, but the band’s confidence resulted in the successful reimagining of them in a fresh and innovative way. “We wanted to show a different side, a different version of the same story. We wanted to show a more musical side, a more raw side. We had no idea how they were gonna sound. We rehearsed them like the day before then went into the studio,” Derek admits. Their single recording session took place at the famed Sunset Sound and was completed in a matter of hours. “We only had a couple of hours really. We had to get out. ‘Cause it’s Sunset Sound, ya know, and that was the room Prince recorded albums,” he added with awe. Fueled by the magic created in that very room, each band member felt inspired and motivated by the ghosts of their heroes.

Day has proven by now that he excels under pressure and time constraint. Back in September, the frontman stepped in at the last minute to perform with Mötley Crüe at the Taylor Hawkins Tribute Concert. “They say don’t meet your heroes, but I kinda think that is a false statement now,” he says of the experience. “Maybe we need to redefine the word hero, because these guys are professionals. They’re pros and they’re really sweethearts, but they work all day. Dave [Grohl] was just like working all day. It was kind of crazy. There was a shift I would say in me after that. The next day, I feel like I became slightly different.”

Adding an extra layer to the intimacy of these stripped back tracks, they were simultaneously filmed as the band performed them. Recording each song in only one take, there are no overdubs or anything processed in post-production. Fans can both watch and listen to the acoustic recordings, creating a raw and intimate performance that feels both personal and private. In such a stripped back performance of these originally highly charged rock tracks, Day’s voice is highlighted in a primed way that we have yet to hear. The format gives his powerful vocals the opportunity to shine without any overlay or distraction. On the topic of his vocal approach during recording, he reflects on the process saying, “You can notice my mannerisms are really kinda odd. I’m using my hands to try to pinpoint the pitch. You see my eyes are kind of thinking about my diaphragm and making sure I don’t blow my voice out before we get to the third song. This approach is really different because when you’re in a studio and you can do multiple takes, you can just be laid back and you don’t have to use so many gestures. But I had to really pinpoint and attack this. I’m a little sketched out with how I look in these videos,” he laughs. “I look maniacal. Whereas in the normal studio you get to feel more, but this is thinking more. I feel it, but I just need to make sure I’m on point.”

Each band member equally contributes to the songwriting process, although the duo joke that their formula is not having a formula and they just have fun with it. Bassist Franco Gravante personally mixed these acoustic tracks, a passion which he is self-taught in doing. “When we would write before the first album came out, we wrote a billion songs and Franco would produce them… just as demos, but pretty close to what was the final product,” Derek says. Although the band only formed in 2019, they work well as a tight knit unit, despite being near strangers only a matter of four years ago. With members hailing from across the globe, including Hawaii, Los Angeles, Argentina, and Dallas, there is an intrinsic polarity in the band, which culminates in their unique ethos. On their particular origin story of meeting one another online, Franco says, “We are all very, very, very different actually. Which is weird, because you could think it would be a bad thing for a band, but I think it’s a very good thing. You never get bored. And that shows when we’re writing songs, or playing an instrument, and when we’re all together. Each one of us has a very unique approach to life in general.” Adding to the sentiment, Derek states, “We learn from each other which is really cool. That’s kind of rare.”

The precision in Day’s vocals and the band’s musicianship are as strong as ever, proving that whichever side Classless Act allows us to see, they are operating at the top of their game. The band are getting ready to hit the road for a 19-date tour throughout November and December, aptly titled “The Most Wonderful Tour of the Year,” showing live and up close why they are rock music’s most exciting debut of 2022. “We’re going all out for this show,” Franco muses. “We have been rehearsing nonstop.” When selecting which songs will make up their setlist, they are drawing from the debut album and the upcoming acoustic EP. After asking which ones they will pick and choose to play in their original formats versus the new acoustic renditions, Franco coyly states, “We are still working on that. With the whole band they sound pretty great. And you have to bring the mood down and for sure we will do that, but ya know we might even play the same song twice. Who knows”. Admitting their personal favorites off the acoustic release are “Time to Bleed,” and “All That We Are,” the pair also tease a possibility of them leaning into the holiday spirit of their tour. They have recently re-released their holiday song, a cover of “It’s The Most Wonderful Time Of The Year,” along with its eccentric music video that puts the “classless” in their name, all in good fun. Naughty or nice, the band walks the line between them and the versatility of their music reflects this.

Welcome To The Acoustic Show is out on December 16 via Better Noise Music, and their 19-date tour kicks off November 29 in Dallas, TX, and continues through December 31 in San Diego, CA. Dates include headlining shows as well as appearances supporting Billboard chart-toppers Giovannie and The Hired Guns. The full rundown of dates appears below, and tickets are on sale now at https://classlessact.com/#tour.