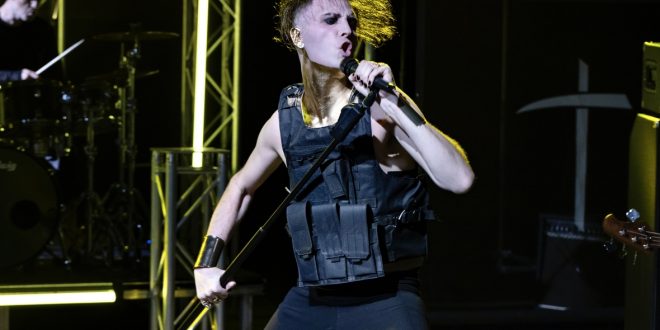 The Hate Club is a dark metal project led by singer-songwriter, multi-instrumentalist, and producer Alex Poe. Born in Kyiv, Ukraine and currently based in Los Angeles, California, Poe has gained traction through his recordings, as well as touring with a full band around the United States and Europe, since forming the project in 2017. His latest single and accompanying video, “Cursed”, emphasizes The Hate Club’s essence as a band effort, and will lead off their upcoming debut full-length album.

I caught up with Poe to discuss his current single, the Ukrainian music scene, the comparison of his fanbases in Europe and the United States, and what he has gleaned about his growth as a musician and producer.

I come from a family who is passionate about all things music. I learned to sing at an early age, and by 13, had my very own Fender Strat guitar. I tried my hardest at learning all that I could. Because I was born with cerebral palsy, I had to teach myself an adaptive playing style. I learned to write and record my own music, despite these difficulties. In college, I started making great use of my writing abilities by reviewing music, as well as copy editing. I guess it's best to stick with what you know, while welcoming a fair challenge at the same time.
Previous Imagine Dragons announce 2023 European tour
Next Rabbit Junk Brings Fatalism And Frustration To ‘Apocalypse For Beginners’