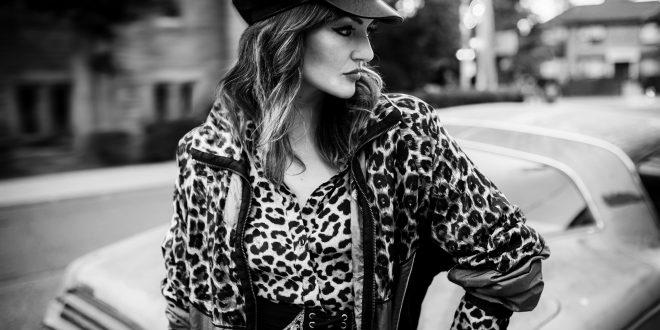 Camera phones are exciting, and some of them are even high quality. But for serious photographers and movie-makers, it’s hard to beat an old-fashioned film camera. It’s an object with heft, gravity, and authority; bring one of those to a shoot, and your subject will know that you mean business. Film cameras are also beautiful objects – and they tend to make their users look pretty cool, too. In Kit Vale’s smoldering clip for “Pet,” her latest single, singer and songwriter Jen Simpson turns the lens of an old film camera on a man she clearly desires. She’s overwhelmed by passion and maybe under the spell of his beauty. But as long as she’s got her finger on the button, she’s in control.

The “Pet” video is a role reversal: usually, it’s the beautiful woman under examination and the man taking the shots. But Simpson is an experienced hand at turning expectations upside down. She’s defied stereotypes and erased boundaries as the frontwoman of Neon Bloom, the irresistible Toronto quartet band that found an unexplored middle ground between raucous garage rock and sleek synthpop. She opened ears and toured the globe with Machetes and The Never Evers, groups that always led with fearlessness. On her own as Kit Vale, she’s mixing blues-rock, radio pop, grunge, film soundtrack music, hip-hop and trip-hop, post-punk, electronica, and even a little doo-wop in unorthodox ways, following her instincts and extending her reputation as an innovator.

“Pet” builds on the success of “It’s Our Time,” an anthemic debut single that made her commitments to equality and social justice manifest. The new song is just as bracing and just as urgent, but it’s considerably more seductive. Over tough, distorted guitar and a muscular drumbeat, Kit Vale communicates longing, desire, and maybe a bit of menace, too. Similarly, she strides through the “Pet” video with a combination of swagger and sweetness. She’s clearly smitten with model Alex Ryfka, and Ryfka acts like he knows it. But she’s got a secret weapon of her own: a vintage Kodak Duraflex II camera. At the beginning of the video, it’s on a tripod, and there’s a tenuous distance between the filmmaker and her subject. By the middle, she’s got a Minolta around her neck, one hand on the camera, and another on Ryfka’s cheek. She’s getting up close, determined to get the shot she wants — and more.

How did your musical journey begin, and at what point did you realize your talents were worth sharing with the world at large?

As a kid, I grew up surrounded by music. My mom is a musician and choir director and my dad was a music fan who would play loud songs at high volumes pretty frequently. I used to memorize the lyrics to all the songs I liked, writing them out over and over. It became a sort of ritual for me if I really liked a song. At 14 my mom got me an electric guitar and I played a bit, but didn’t get too serious.

At the age of 15, I began modeling. It seems unrelated to music, but actually played a pivotal role in my life as a performer. It was never something I had thought of doing or expected to do. It sort of happened to me. I was very shy, lived in the country, and knew nothing about fashion, but being involved in that industry forced me out into the world at a young age. It made me come out of my shell quite a bit. From those experiences, I gained a lot of confidence, in terms of sharing myself with strangers and accepting feedback, both negative and positive. Though very different from performing music, that experience gave me a thick enough skin to feel ready to sing when the opportunity arose.

When I moved to Toronto after high school, I started doing vocals with an electronic artist named Hop Frogg. We would hang out at Signal to Noise studios where I met my good friend and longtime producer Rob Sanzo. Rob was always recording different bands and Froggy and I would mess around with sounds in a back room. From there, I ended up doing vocals for other electronic artists, but always really wanted to be in a rock band. I only knew men that were in bands at that time, and none of them wanted to play with me. Luckily, a few years later, I ended up fronting an all-girl punk band called Machetes. Though relatively short-lived, we really grew together as musicians and pushed each other as performers. I found my confidence as a singer in that band. Machetes ended up being managed by Roger O’Donnell of The Cure and we spent a brief period of time in England recording and playing shows.

From there, I went on to front the Brooklyn-based band The Never Evers, until I experienced debilitating health issues, which put an end to that band. After a period of convalescence, I was able to start another band in Toronto – Neon Bloom – which I currently write, record, and perform in as the lead vocalist. As Kit Vale is a solo project, I now have the opportunity to release music and videos exactly as I want to, when I want to, which has been a long-term goal and is very exciting for me.

In what ways have you noticed growth as an artist since your 2020 debut to now with your latest single, “Pet”?

Since my debut release in 2020, I have done very little publicly as Kit Vale. In the background, however, I have written several new songs that I’m quite excited to share. It’s sometimes a long process to get the songs from the writing stage to recording. I’m planning to release music more consistently from now on. The Covid lockdown period had a huge impact on me, creatively. I found it difficult to stay motivated during that time. Not being able to rehearse or play shows took a toll on many musicians, on top of all the other stressors everyone was dealing with. Not having that outlet made me feel like a fish lying on land. It feels so good to be back into recording and releasing music again. I think that break ultimately reaffirmed my devotion to music as a lifetime pursuit.

What inspired “Pet”? Talk about the lyrical story being told and how you personally connect with it.

“Pet” is meant to be fun. It’s about sex and desire, like so many rock songs are. However, I had rarely heard those kinds of songs performed by women. I always wanted to hear an unabashed celebration of femininity expressed in a way that was loud or raw or intense, like the performances of the men I grew up idolizing, such as Elvis, Mick Jagger, or Robert Plant. “Pet” is a swaggering expression of sexuality from a woman’s perspective. It flips the typical masculine rock n’ roll lyricism I grew up listening to and enjoying, by focusing on the woman in a way that subverts the stereotype of women as passive, chaste, or removed from their sexuality.

How was it collaborating with The Never Evers for “Pet”? Why were they the perfect fit for this song, and how did they enhance its potential by being a part of the project?

“Pet” was written by myself and ex-Never Evers bandmate Robert Lechner (bass). We used to perform it live as The Never Evers and recorded it not long before the band ceased to exist. We never got a chance to release “Pet”, along with other recordings we made. Years later, I felt like the song deserved to be given a chance and released it as a Kit Vale recording (featuring The Never Evers). I always loved The Never Evers performance on the song and really wouldn’t have wanted to change it. Whenever we (Tony Sjoman, Robert Lechner, Walter Gardner, and I) played the song live, it had this very powerful and visceral feeling, which I feel producer Rob Sanzo captured in the recording.

What was your experience shooting the music video? How did your creative vision play out, and what do you want viewers to recognize about the visual?

The drector, Ingrid J Monday (aka: Miz Monday), is a long-time friend and collaborator. Working with her is always inspiring and energetic. She’s amazing at capturing images that really reflect your vision, while also incorporating her signature, fashion-conscious style. The premise for the video was inspired by the famous photography scene – starring supermodel Veruschka – in Michelangelo Antonioni’s 1966 murder mystery Blow-Up. As two women who used to model, we had a lot of fun flipping the gender dynamics in this video, with myself playing the lecherous photographer, while Alex Ryfka played the part of a somewhat preyed-upon male model. It was meant to be a fun, tongue-in-cheek type of video with a nod to the 90’s grunge aesthetic that reflects the musical influences behind the song.

If you were able to speak directly with your new and returning fans, what would you want them to know about you and your music? What is in store for you next?

Through my art, I always aim to share a genuine connection with someone, either at a concert or online. I’ve had some really interesting and deep discussions with people that would never have happened if not for the art acting as a conduit for connection. I’m actually quite shy – an extroverted introvert, if that’s a thing. To me, each song is a little door into my internal world that I’m opening up a bit, hoping someone can relate and will be interested in opening it further.

My plan is to release another single and accompanying music video very soon, which along with “Pet”, will be part of an album I plan to release in 2023. The music for the songs on this album are the ones that were previously recorded with The Never Evers. I also plan to record and release other, newer songs and music in the coming year.