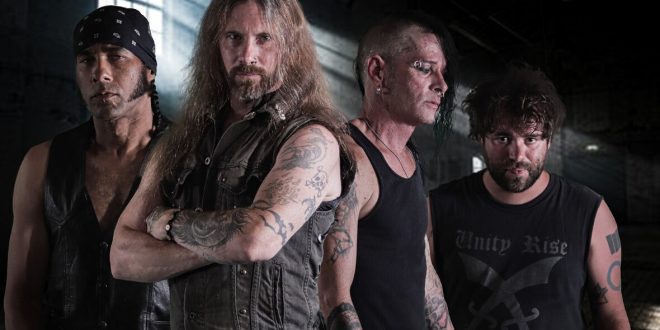 Savannah, Georgia collective Them Damn Kings is gaining serious traction with their debut album, Rise Up, which has been warmly received by way of review coverage and consistent presence on American metal radio since its release this past September. Cemented by singer/multi-instrumentalist Jef Rhodes and drummer Ryan Folden, the band is planning further live dates to support the album, as well as more music to release in the future. I first spoke to Jef Rhodes on November 18th, 2020, while the band was promoting their debut single, “Throw It Away”, and their album was tentatively considered for a May release the following year as Covid-19’s devastation fast became rampant.

Yesterday, I followed up with Jef, and it was great to catch up after all this time. The band recently toured in support of Gemini Syndrome as a four-piece, and is currently looking for a successor to second guitarist Lando Carter, who left the band on amicable terms. In addition to our discussion of the new album and the tour, we touch upon other topics, such as finding a sense of community in trying times, as well as strengthening and solidifying bonds with close friends.

I come from a family who is passionate about all things music. I learned to sing at an early age, and by 13, had my very own Fender Strat guitar. I tried my hardest at learning all that I could. Because I was born with cerebral palsy, I had to teach myself an adaptive playing style. I learned to write and record my own music, despite these difficulties. In college, I started making great use of my writing abilities by reviewing music, as well as copy editing. I guess it's best to stick with what you know, while welcoming a fair challenge at the same time.
Previous Gallery: Magdalena Bay at Majestic Theatre in Madison, WI (11.06.22)
Next Giant Fetus Just dropped “Say What?”