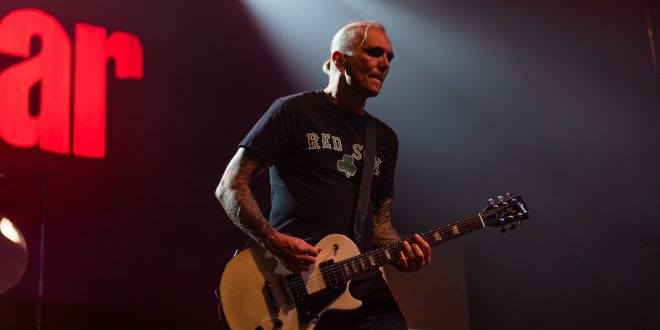 Everclear, one of the leading alternative rock bands to emerge from the ‘90s led by vocalist, guitarist and founder Art Alexakis, has released their new single “Year of the Tiger.” The politically-charged offering marks the first new song from the band since the release of their 2015 album, Black Is The New Black.

“After all of the events of the last almost 3 years with Covid, worldwide shutdowns, the political debacle of 2020…emanating from in and outside of MAGA world, I felt I needed to write a song that not just explained my anger and frustration, but a song that served as a mission statement,” shares Alexakis, who was also born in a Year of the Tiger in 1962. “I feel like the tiger should be the new symbol of the new Democratic party. We will not back down, we will not forget, we hit back, we challenge lies, and we refuse to be intimidated by ignorance or loud voices. To quote the song’s lyrics, ‘Here we are in the Year of the Tiger, we are where we are because of all the big lies.’ Tigers are everywhere.”

Everclear is celebrating 30 years as a band in 2022. In its honor, the four-piece – Art Alexakis (vocals, guitar), Davey French (guitar), Freddy Herrera (bass), Brian Nolan (drums) – have been on the road all across the U.S. on their headlining 30th Anniversary Tour, which featured special guests Fastball and The Nixons in the summer and Sponge this fall. The band also released a special remastered reissue of their 1993 debut album, World Of Noise, in June, making the currently out-of-print album available for the first time on digital streaming platforms. World Of Noise – 30th Anniversary Deluxe Edition features all 12 original tracks plus 6 bonus songs including the previously unreleased “Drunk Again” and “Nervous & Weird 2001 Remix.” The reissue will be available on vinyl soon.