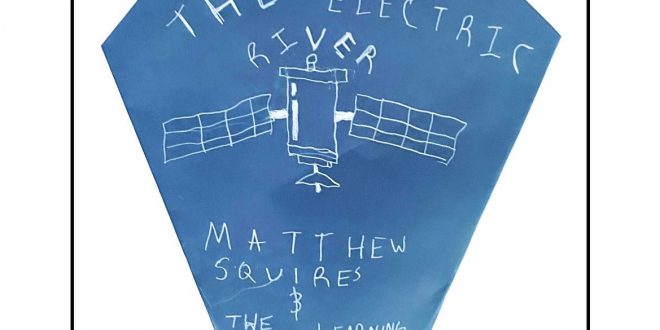 As jaded as we are in the world right now, it’s easy to accuse a lot of music for not having a level of sincerity that some might dismiss as hokey, when in fact it’s a source of discomfort due to how real it feels. Those types of musicians who aim for such romantic and lofty goals have a special place in my heart which I assume is mutual, as evident in Matthew Squires and the Learning Disorders’ latest record “The Electric River.”

Equal parts tome poem and almost dark comedy album, it’s a tour de force of indie music, capitalizing on genuine emotions and staggeringly detailed and layered lyrics that are consistently benefited by repeated listens. With a stripped down true indie approach to its sounds, the record resembles something makeshift, like a personal arts and crafts project that you can tell comes from a group so unified in their vision as spearheaded by Squires, bringing a dark time in his life to the forefront with care and comedy. Across the brisk but methodical six tracks, the group begins in earnest with a love song that starts softly before expounding into a proud declaration with “Love and Other Vaccines.”

It’s the type of song that channels the strengths of the group and expertly lays the groundwork of their romantic and confused intent as it immediately dips into a surprisingly dark turn with “Felt Like Your Man.” Something that has somewhat aggressive statements that come from a place of passion, it’s a great example of how many wonderful details Squires incorporates into the work.

The equal parts puzzle box Ballad of Norm Macdonald pays tribute to the late comedian as best as he would want, a song that revels in its contradictions and pointlessness, it’s almost rendered moot if not for the loving homage to the comedy stylings of the former Weekend Update Host. “Life of Trees” has a breezy almost tropical aesthetic, taking a romantic getaway with lines like “Let’s Listen to some Paul Simon as we drive through west Texas.” As I said, the lyrics are so detailed and specific it’s hard not to imagine they come from seriously personal spots. In an especially challenging stance, the music almost baits you into feeling a level of discomfort with intimate lines like “Let’s tell jokes so dirty, god would hide his grin.”

It’s a record that’s heavily focused on the present, despite its nostalgic nature as it heads into a darker uncertainty in the final two songs. The record was recorded starting in 2020 during the pandemic, with the band recording together at one of their members homes, which is what helps create a textural camaraderie. It might not be for everyone given its subject matter and aesthetic that’s steeped in a now kind of soft retro sound to the 90s folksy work. that became so popular with the burgeoning generation X bohemian crowd which the band members certainly fit the bill of. It’s going to remain as one of the most memorable music experiences I have this year.