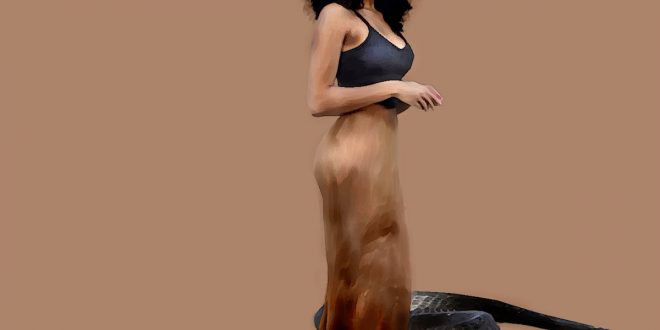 While his sound and overall presentation may not fully indicate it, Clash Bowley is keeping the spirit of Punk Rock alive. With his irreverent and somewhat recalcitrant approach to the music business, Bowley make his music on his terms. He’s quite frankly unencumbered by the disingenuous posturing and endless campaigns of homologation in modern music. His new album, Lamia, is not a Punk record in terms of style, which is ironically what qualifies it as one. It’s a slinky, and somewhat repetitive work, that invests more into what it has to say, than its sense of fashion.

Outside of him being from Boston, not a lot is known about Clash outside of his musical exploits. His bio literally reads, “was born and has not yet died.” The air of mystique that surrounds him suits his work, especially on his latest offering. Lamia is a 12 song LP that focuses more on steak than sizzle. Imagine a collaboration between The Doors and Butthole Surfers in the midst of a particularly stiff hangover and you might get the picture.

Every song title on Lamia is one word, starting of course with “Lamia.” The psychedelic crocodile shuffle of the title track is a perfect introductory piece to the uninitiated. On “Kink,” Clash poses the question, where’s the kink/where’s the art? This one is sinewy and hypnotic. It sounds as if The Velvet Underground dropped some peyote in the desert, and began a semi formal jam session.

Though he favors effects for his vocals, Clash Bowley has a distinctive and appealing voice that has greater potential. That said, he clips his range just a bit on “Walk.” “Gooseflesh,” on the other hand is a highly flattering article of Clash’s work. The chorus is a genuine hook, with Bowley’s emphasis on the word “flesh.” This one is quintessential Clash and is one of the standout moments on Lamia.

Clash goes fully electric on “Life,” and also infuses an industrial tinge. This one is take it or leave it, but it does reinforce the fact that Clash is highly effective in creating an atmospheric ambiance. “Sleep” is initially defined by its staccato arrangement and robotic vocals by Clash. By the end it develops into something rather menacing. Ultimately, “Sleep,” ends up being one of the most compelling songs on Lamia. “Gloria,” showcases Clash at his absolute best, with the sultry guitar work and delicious bass breakdowns. There’s a seductive undertone to this one that shows a different side of Bowley than most of Lamia.

This record is certainly an acquired taste, but an artful one as well. Some may accuse it of being Avant Garde, and whether or not that was Clash’s intention is impertinent. This man exists to serve only one master and that is himself. There’s something to learn from both Bowley’s work and his philosophy. It’s ultimately the internal relationship we have that should have the most influence on our decision making. Lamia is now available on BandCamp and you can also find Clash on Reverbnation.