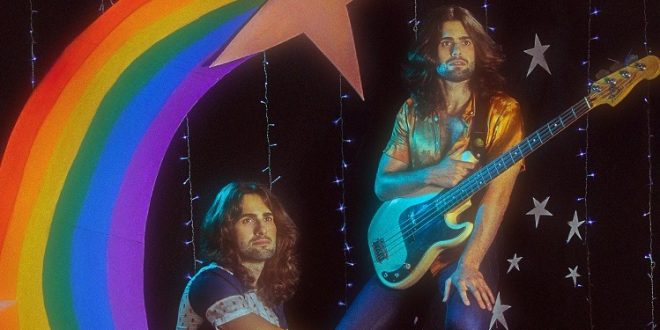 The Moon City Masters are composed of multifaced twin brothers Jordan and Talor Steinberg. Releasing their debut EP, The Adventures of the Moon City Masters in late 2019, the Brooklyn-based hard rock duo earned critical acclaim, with Classic Rock Magazine aptly noting the EP’s “heart, harmonies, and rays of California sunshine.” On November 2nd, the band will release their debut full-length, The Famous Moon City Masters, which pairs their previous singles together with newer tracks to create one cohesive, substantial album.

This interview holds personal resonance to me, in that it’s the first time I’ve spoken with these guys since our time at Westchester Community College, which was a full decade ago; to say I’m proud of them is, in the widest sense, an understatement. Alongside our discussion of the new album, we touch upon pertinent additional topics such as music listening tendencies in relation to creativity, conquering writers block, and of course, memories of our formative days.

I come from a family who is passionate about all things music. I learned to sing at an early age, and by 13, had my very own Fender Strat guitar. I tried my hardest at learning all that I could. Because I was born with cerebral palsy, I had to teach myself an adaptive playing style. I learned to write and record my own music, despite these difficulties. In college, I started making great use of my writing abilities by reviewing music, as well as copy editing. I guess it's best to stick with what you know, while welcoming a fair challenge at the same time.
Previous Interview: The Hunna’s Daniel Dorney on New Album, Returning to Their Roots and Justin Bobby
Next CROONER JRU ANTHONY PREMIERES VIDEO FOR “97 CHEVY “ LIFE FOR NOW LP IS OUT NOW