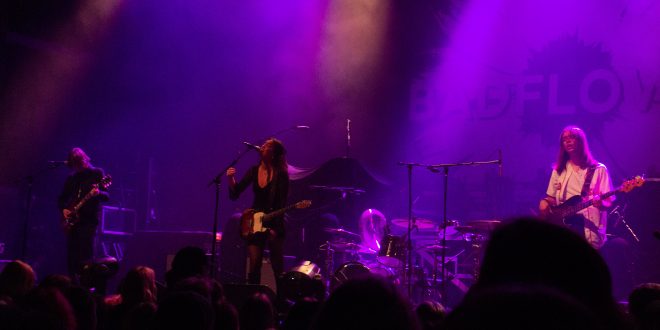 Up-and-coming alternative rock band The Mysterines are your next “need to hear” artist. Currently on tour supporting AWOLNATION, the Liverpool natives have already created quite the name for themselves across the pond. Originally forming in 2018, the group broke into the scene with their smash single “In My Head” earlier in the year, after signing with Universal who discovered them after their 2020 EP, Love’s Not Enough. Follow-up singles, “Hung Up,” “The Bad Thing,” and “Dangerous” continued to garner the band recognition and radio play, ahead of their debut album’s release in March 2022. Reeling, produced by UK great Catherine Marks (The Killers, Wolf Alice, Foals) was released to widespread acclaim, and set the band on their trajectory to fast-rising rock stardom and landed them at number nine on the UK Album Chart, The Mysterines consists of Lia Metcalfe (vocals and guitar), George Favager (bass guitar), Callum Thompson (guitar and backing vocals) and Paul Crilly (drums and backing vocals). The quartet are set to open for Arctic Monkeys on their upcoming European tour, but in the meantime they’re introducing themselves to America with a two month stint on tour with Badflower and AWOLNATION. Opening up the show at Boston’s iconic House of Blues, the band casually sauntered on stage with drinks in hand. Setting up while laughing with one another as if nearly two thousand people weren’t watching, they laugh at some sort of inside joke we aren’t privy to while adjusting their instruments. Their camaraderie is apparent, yet when they crash into their first song, title track “Reeling,” all smiles vanish and their punk masks come on.

Their Nirvana and Hole influenced old-school grunge sound is startling to fans there for the headliner, but Metcalfe’s vocals instantly command the room and captivate new audiences. She sings with a roughness to her voice that holds a seductive, enticing charm and effortlessly distills an edgy confidence. Their sound is laced with a moody, grunge-rock style and an aesthetic to match, as each member dons dark attire and menacing stares. While they may look and sound rough around the edges, it’s evident they are a young band having fun discovering the tumultuous joys of rock and roll. There is an attitude and swagger in their songs that gives them an adherent confidence and coolness. It is not unapproachable, but instead draws listeners closer with interest and admiration. Oh to be that young and that cool. Freshly twenty two, Lia Metcalfe celebrated her birthday only two nights before at their stop in Pittsburgh, PA. Age aside, her matured, raspy vocals and attitude surpass her years and cement her as a PJ Harvey or Patti Smith mannered frontwoman.

The band saves the small talk during their limited time on stage, and instead lets the music do the talking for them. They smoothly transition into the swinging “Old Friends/Die Hard,” profuse with a sultry dominance. Metcalfe plays with suggestive lyricism and tongue-in-cheek humor, singing, “Everybody thinks I should be sorry/ Others think I’m the life of the party/ I don’t know, I think I’m just horny/ Frankie, come back I’ll show you I’m lovely”. Their cool disposition follows them into the deliciously grungy and ridiculously catchy “Dangerous,” rocking the audience to life with their masterful musicianship. The band is a visibly tight unit, sauntering easily from one song to the next.

With a punk energy and invigorating kick, “Life’s A Bitch (But I Like It So Much)” sends the band blistering into an arresting, high energy number. The song landed The Mysterines radio play, chart positions, and an ever-growing fanbase, as it blisters with a rawness and jagged edge that stands out amongst other songs of a similar vein. Metcalfe sings with an alluring lilt, while an easily accessible chorus collides their fuzzy tones with catchy melodies. Expertly metamorphosing rough, distorted garage rock into a fresh, electrifying take on the genre, the band does not falter or break character once. On their final song, the anthemic “Hung Up,” guitarist Joey Morrow of Badflower joins them on stage. “I’m sick of playing guitar now, so he’s gonna do it for me,” Metcalfe mumbled into her mic as they bounded right into song, guitars blaring. The track is a percussion heavy, soaring rock anthem that feels equally intense and fun.

With another month left on American soil, The Mysterines are set to magnetize audiences one show at a time. As Reeling continues to assert itself as a buzzworthy album of the year, their young, carefree spirit imprints on each track and performance, asserting their stance as the next big thing in rock. The band have recently released a four track acoustic EP, titled All These Things EP, which contains live cuts recorded at Rough Trade EAST. Full steam ahead, the band is not slowing down anytime soon, and we recommend you hop aboard the train now. 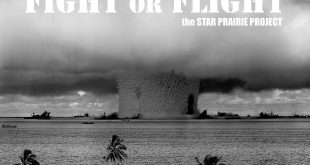