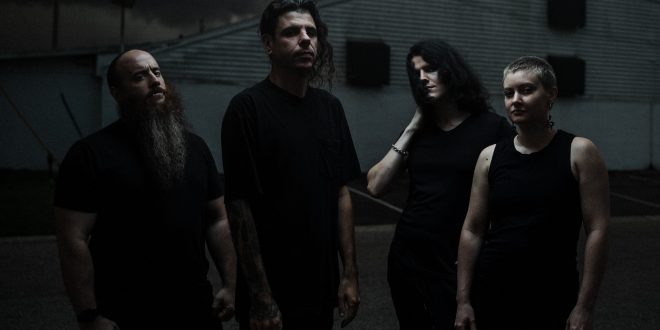 Bradenton, Florida deathcore band Grasping At The Shadow has released its newest single, “Shards of Glass”. The track is brutal from the outset, with a deliberate half-time riff performed over Violinist Kimberly Hovencamp’s simple yet effective melody giving way to double-time blast beats and crunching riffs from guitarist Daniel Avalle and bassist Margaret Applegate, serving as the perfect bed for vocalist Jordan Hanley’s throat-shredding delivery.

Speaking on the song, the band said “This single represents a fundamental shift in your music writing. This song is meant to be given meaning by the listener, to invoke an image or scene in their mind unique to them.“

This single will be on the band’s upcoming EP, which is currently in the writing and production phase. The band plans to follow up this release with further singles to continue the EP rollout before announcing a release date. The track was recorded, mixed, and mastered by Chris Whited at 1776 Recordings. Along with the single, the band has released a music video, directed, shot, and edited by Toddi Babu.

“Shards Of Glass” is now available across all major streaming platforms. Listen to it on Spotify now or watch the video on YouTube below.

Anger, sorrow, and pain personified was the goal when creating Grasping At The Shadow. Consisting of vocalist Jordan Hanley, violinist Kimberly Hovencamp, bassist Margaret Applegate, and guitarist Daniel Avalle, the band strives to create a unique brand of Deathcore by incorporating violin layered in with death metal riffs and brutal breakdowns. With this unique mixture, Grasping At The Shadow is a heavy, eerie, sight to be seen.

Formed in 2011 by Daniel Avalle and Kimberly Hovencamp, Grasping At The Shadow has played with Lorna Shore, Rings of Saturn, Hate Eternal, Decapitated, The Browning, and many other national touring acts. After releasing their debut EP Nothing After Death, the band took a brief hiatus before reforming in 2022. Of their hiatus and reformation, the band says “Taking a break was not an easy decision to make but the request from fans the world over for more music could not be ignored. So in this era, we set out to create the angriest, most pissed off music we could.“

Going forward, the band plans to release more material as singles, filled by a brand new EP, and eventually a full-length album. They are also aiming to transition to becoming a touring act and engage with fans outside of their home state.

If you’re looking for a unique approach to Deathcore or a band similar to Filth, Humanity’s Last Breath, or Distant, look no further than Grasping At The Shadow!

Connect With Grasping The Shadow: