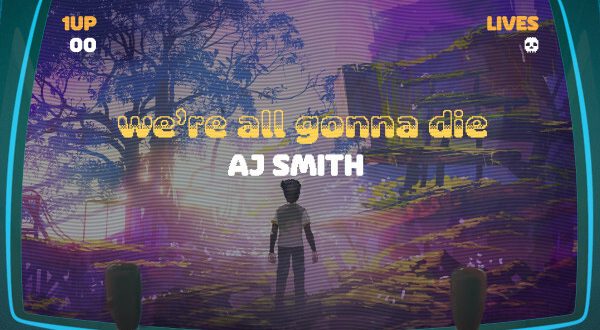 We’re living in the age of the outspoken, the unwavering, and the self-aware. This is the age of new realization, but more than anything else, this is the age of young people finally having their voice, once and for all. With that to drive his passionate vocal, we find AJ Smith ready to bring the melodic heat into the next decade of pop with his first single, “We’re All Gonna Die.” He’s swaggering as he comes up to the microphone, but his words are devoid of an arrogant undercurrent that too often drags a good track into the gutter. This is a new age for independent musicians, and it can be said that Smith is taking full advantage of the opportunities he’s got right now.

Songwriters use certain tools more than others when trying to create a mood within any given melody, but it would seem to me that AJ Smith has no qualms with using every device set before him in “We’re All Gonna Die.” The vocal isn’t the only match striking up a vibrant flame in this song; we’ve got the multifaceted synth parts, which include what I think is the leering echo of a distant string element during the chorus, as well as a noir-like percussive beat and a muted bassline that wants desperately to be heard (not unlike the protagonist – who is perhaps Smith – that the lyrics present us with). It’s not sensory overload, but were it not mixed so smoothly, it might have been.\

I would love to hear AJ Smith try some jazzier material in the future. Though “We’re All Gonna Die” is electro-rock with a pop edge, it’s got an experimental stylization that leans more towards the avant-garde than it does a conventional, Billboard-approved sound. I’m not suggesting that he’s wasting his time making melodic pop music because that couldn’t be much more false a statement. What I am saying is that, with a palate as diversely appointed as his is, he shouldn’t feel limited to making radio-friendly music alone. This is an angular composition that doesn’t fit into any box that I would normally shove a halfhearted indie hybrid inside of; it’s straight pop prowess with some evocative verses that make an even bigger impression than the grooves surrounding them do.

The future is looking bright for this young man and his dynamic sound, but he’s going to have to put a lot of energy into whatever he makes in the studio as a follow-up to this awesome new single. “We’re All Gonna Die” doesn’t just set the bar exceptionally high for AJ Smith; it raises expectations for an entire scene of pop players on the viral level who are trying just as hard as he is when it comes to being involved in the new emerging generation of pop. He doesn’t convey anything but real talk in this track, and if he can replicate the same formula in material that expands upon the blueprint of the sound that he’s demonstrated for us here, he’s going to be turning a lot of heads with his earthy harmonies in the next decade.