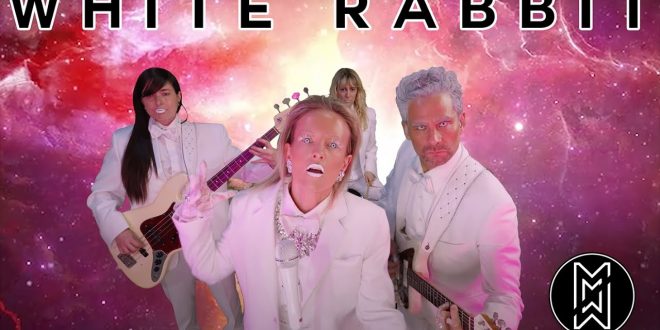 The layered look is pretty big in rock right now, and so when a band like Mitch & Millie comes around with a black and white take on “White Rabbit,” critics and audiences the same are going to be left talking about it. Mitch & Millie don’t come off like they’re riddled with ego and tempted by indulgence here, but there’s absolutely something unique about their sound that should boost their swagger heading back to the studio – particularly when considering the lackluster competition they’re up against at the moment. This is a player’s market and one that is inclined towards the postmodern like nothing else right now.

This arrangement blends the old school framework of the original “White Rabbit” with some new themes found mostly in insular indie pop music as well as melodic noise rock, the latter of which can be felt in the treatment of the climax here. I think Mitch & Millie were wise to experiment with the loose ends in the composition just out of a desire to make the narrative their own, and had they not invested as much time here as they did, the resulting single wouldn’t feel as pulsating as it does in this scenario.

It’s difficult to do Jefferson Airplane right, let alone something like “White Rabbit,” but with the fortitude and artistic drive these players have to offer in their new single, we can learn that covers can be profound, if not career-defining for the right parties. Mitch & Millie have a lot of peers in the psychedelic movement that could not have done this song justice, but together they have made something here that deserves a lot of accolades from across the board, including from those who hold the standard of the original “White Rabbit” true to the surreal rock model in 2022 and beyond.