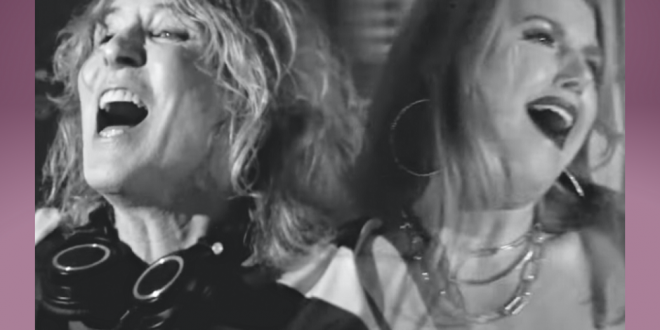 Angela Hench’s cover, with second vocalist Gregory Markel, of Freddie Mercury and Montserrat Caballé’s 1987 rock/opera synthesis “Barcelona”, qualifies as one of 2022’s real stunners. It’s unexpected, as well. If someone came to me a few days ago, before I knew this song was out there, and said, what do you think the chances of someone covering Freddie Mercury’s 1987 duet with the opera singer are, I would have answered slim to none is generous.

It’s nice to be proven wrong.

It’s nicer that Hench and Markel don’t treat this track with kid gloves. Hench is a world class singer with a wide vocal range, including a shattering soprano, and she matches each of Caballé’s parts practically note for note. She varies the phrasing some to help stamp the performance with her personality without ever rendering the cut unfaithful to the original. There’s zero sense in attempting to replicate the original note for note, line by line, and we’re lucky Hench and Markel realize that.

Markel approaches the vocals in a similar fashion. Mercury played a slightly secondary role to Caballé in the original and Market does the same for Hench. Some songs aren’t written as duets, but they can be restructured as such. “Barcelona”, however, is intended as duet from the moment it is written and, as such, finding the right vocal union is paramount.

It has happened here. Markel’s experience as lead singer for progressive rockers Altered State gives “Barcelona” the needed second voice capable of generating the necessary “answer” for Hench. Their interplay and exchange of lines is magnificent cumulating with rich peaks when listeners can enjoy the full fruits of this collaboration.

They benefit, as well, from an expertly orchestrated backing track. It shares the performer’s inclination towards being faithful to the original while still making a mark of its own. The video clip Hench has released supporting the song is an excellent promotional video because it frames the performance and performers with a series of appealing and compelling visuals.

“Barcelona” gains much from Hench showing it the care it deserves. It’s an extension of the way she lives her life as Hench isn’t someone why shies away from involving herself with life in all its fullness. She is a fixture in her local Detroit community, a full-time nanny, and boasts a prestigious musical education that, fortunately, doesn’t short circuit her ability to be utterly real as a performer.

Projects such as this sometimes have a way of feeling unnatural, plotted out rather than a reflection of genuine sympathy with one another’s skill. It isn’t the case here. I am not privy to how Hench and Markel were first introduced to each other, but the decision to pair these two together with this particular song is a bit of inspired magic that you don’t hear much of in modern music. We need plenty of magic in days like this and I suspect that we’ll definitely hear more of it again from Hench in the near future.