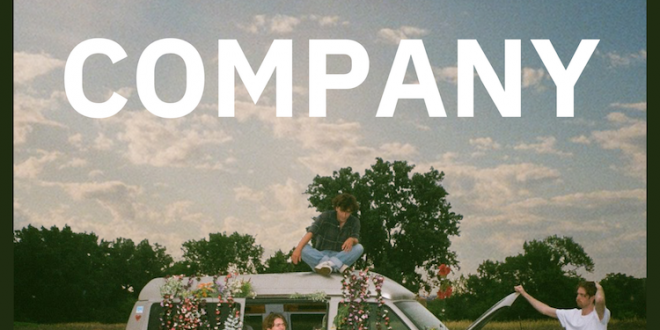 There’s something a little cold and calculated about Minnesota band Present Company’s music. It’s steely, much like Gary Numan’s early synth-pop music. If you like your music more than slightly chilled, Present Company may give you aural great pleasure.

“It’s Not Looking Good,” for instance has a touch of synth-pop running through it, even though it also incorporates plenty of electric guitar, as well. In fact, it inserts a group spoken word part smack dab in its middle. The song’s lead falsetto vocal, however, also gives this track in particular a decidedly Sparks feel, as well. However, the bass intro to “Normal,” may remind you of some of The Cure’s better dirges. This one’s guitar part is angular and disjointed, in the best possible post-punk way. All this is to say that Present Company ought to remind you of many different acts. The four-piece’s self-titled album sounds good the way alternative rock radio once sounded, before all that annoying pop-punk came along.

The album is a whole 14 songs long and doesn’t seem to follow any particular lyrical theme. One theme it doesn’t appear to want to follow is that of romantic sentiments. Granted, there is one titled “Hold Me,” but this is not at all bedroom music, not by a long stretch. One other ‘love’ song is appropriately titled “Prickly.” “Don’t say that you love me,” they announce at one point on it, and you best believe them. It’s music more intended for quirky girls and nerdy guys. Albeit young people that like to wear a lot of black. It’s not depressing enough to be Goth music, but it likely would have never been created had Goth not first existed.

Although the band’s music sounds like that which is made by those that wear creepy coats and complicated shoes, the four band members look relatively normal. They’re not attempting to make fashion statements in tandem with musical ones. The best description of Present Company music is post-punk because the act is far more musically sophisticated than mere punk yet carries on the DIY esthetic of that movement.

Some of these sounds are truly gorgeous, too. Take “Forever,” for example. It rides with a smooth and pretty vocal, over an insistent drum pattern. The music is a little off kilter at times, but it still works. This arrangement suggests simultaneous joy and confusion.

“This Time” is one other song that musically references The Cure, but also strongly resembles OMD. It matches a melodic synth part with a partially spoken word lead vocal. The song’s percussion is distinctively ‘80s referencing. However, this is not simply aping a former era’s sounds, but – much like The Killers – borrowing from the past and giving it an individualistic spin.

Yes, you’re going to hear familiar sonic elements in Present Company music, especially if you came of age in the ’80s. But it’s with good reason that even young bands are hearkening back to that musical era. There was so much that was great about it. Present Company’s self-titled album is a truly enjoyable collection of songs, that only gets better with each listen.

Stephen Vicino is the founder of MusicExistence.com. He created this site to give talented musicians a voice and a way to be discovered.
@@svicino
Previous Single Review: Sicily Jordan “You Got Me”
Next Pop Rock Singer/Songwriter George Collins Unveils His Debut EP ‘It’s Been a Long Time’