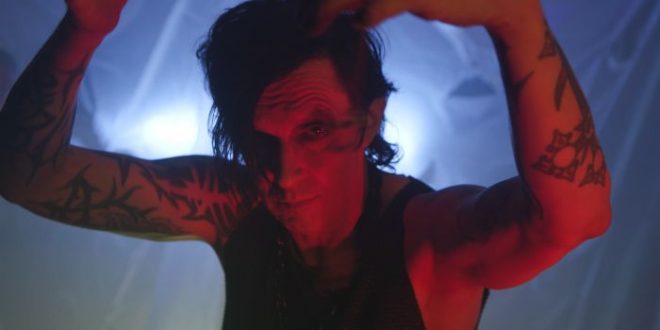 “The music video for Curse Mackey’s ‘Smoking Tongues’ is a neo-noir, fire and brimstone fueled, surrealist short film that encompasses the past, present and future of Curse Mackey’s music and art.’ says director Kyle Cooper. True to form, the video is indeed a strangely psychedelic, dustbowl psychodrama, filmed on location in Tarantula, Texas during the peak of the scorching 100 plus degree Texas summer of 2022.

“Smoking Tongues” is the second single from Mackey’s new LP, Immoral Emporium which is already receiving tremendous response from the press and the fans.

While the video smolders, smokes, and erupts to a whip cracking conclusion the song itself is a quintessential study in Mackey’s artistry riding a razor sharp line between synth pop perfectionist and avant-garde, dark wave destructionist.

Curse says, ”I wrote this song as the final piece of the new album. I wanted to speak to the listener directly, more than I may have done in the past. The phantasmagoria of my first album, Instant Exorcism may have shrouded my feelings but “Smoking Tongues” opened a portal. I don’t think I have felt this vulnerable within a song before and the sound is also reaching into to new areas of exploration.

Mackey continues “The lyrical dialog is as much about me as it is about the listener, and I clearly question our collective future. I know this song is a departure that industrial music purists might find out of frame, but, if you stick with me, we’ll get to the delicious delirium hidden within Immoral Emporium. I empathize with the feelings of alienation and loneliness. Our experiences, “our scars like constellations” get us through these moments until we can again be seduced by the vast potential that exists in the world even on our darkest days.”

“Smoking Tongues” is the second single from Curse Mackey’s new LP Immoral Emporium which is already receiving tremendous response from the press and the fans.

Curse Mackey will take his energetic one-man and a rack of synths show on the road in support of Darkwave legends CLAN OF XYMOX, this November, a long-awaited continuation of their 2020 tour that was cut mid-way by the pandemic.