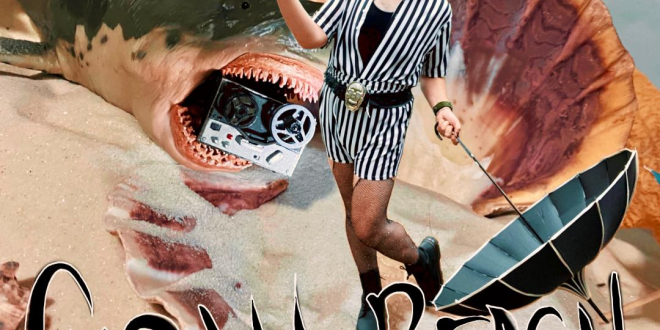 Walter Sickert & The Army of Broken Toys is where you go when you think modern music’s imagination is exhausted. They prove you wrong. Sickert and his extended musical collective of seven additional members return with a new single entitled “Goth Beach” that will raise newcomers’ eyebrows and widen their eyes.

It’s the new skewed and slightly off-kilter offering from the critically lauded Boston based outfit and straps another rocket on their backs blasting them towards local legend status. The heavily stylized nature of the presentation doesn’t inhibit Sickert and his collaborators, however, from inhabiting the song as much as any outcry from the soul.

Consider it surf-rock laden with vamps, theatrical vocals, and humorous, but never outright goofy, vocals. It changes though. Sickert isn’t content with that approach and you’ll hear punk rock running throughout the track as an undercurrent. It’s never overpowers everything, however. Sickert does such a magnificent job synthesizing the song’s influences into a coherent whole that there isn’t a single influence dwarfing others.

His vocals are one of the stars of this particular “show”. Sickert attacks the single with the same brio and disregard of listeners’ expectations characterizing his work. The musicians respond to that. It may not be a quality that other reviewers point out about Sickert, but it’s compelling as hell that he keeps things loose and confident while maintaining withering focus. It never pushes too hard on you, however, and many listeners will come away exhilarated.

Another aspect of “Goth Beach” that leaps out is that it is such a complete package. There are no holes in the band’s sound. It’s important to note that Sickert’s songwriting always strikes a positive note without narrowing the song’s point of view; there are darker hues, yes, but they are woven into a colorful whole. The tense introduction transitions into all out romp before backing off once again are like a canny boxer coming in for the kill before fading out of range. It will have a memorable effect on many.

Manipulating the song’s dynamics without sliding into overkill will score with listeners too. Sickert knows how to orchestrate the song’s different passages for maximum effect while his voice remains a dramatic constant in the mix. Matt Zappa’s drumming has a primal and furious tilt thanks to the single’s production without ever throwing the performance out of sonic whack. The colorful and imaginative flair of the song’s accompanying music video helps the clip stand on its own as an entertaining artistic work worthy of the song.

Walter Sickert and the Army of Broken Toys still play like an unit not far into their journey. They are right to bask in the attention they’ve received, however, thanks to this single and it us continued successes are practically assured.  Are they offbeat? Yes. There’s an underlying fidelity, however, to songwriting fundamentals that drives the track deep into a listener’s subconscious.

You’ll come back to this track, without question, more than once. It has infectious staying power. Let’s hope he does not waste much time with following up the single. Walter Sickert and the Army of Broken Toys’ “Goth Beach” stakes out ground with this song that belongs to him alone and more music will further consolidate the band’s greatness.