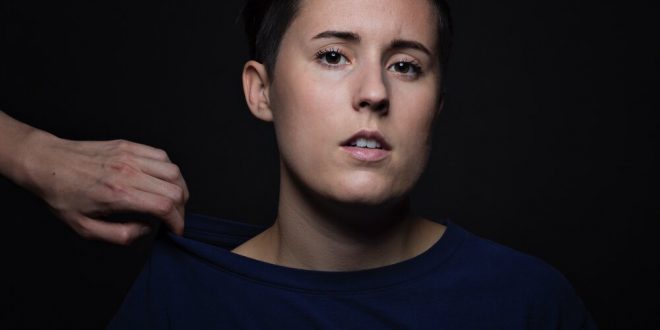 At first glance, it might be the minimalism of the music video for “Rebecca Henry” that catches your eye the most. There’s definitely something rather bold about the lack of indulgence in the visual scheme here, but it’s not doing much to overwhelm the soundtrack as the main star of the show – after all, when you’ve got a singer like Sean Della Croce stepping up to the plate, you can rest assured that a homerun is almost guaranteed (particularly when the material is as stripped down and accessible as it is in this terrific new single and music video).

There are no reinventions of the pop model in the construction of “Rebecca Henry,” and yet the transition from verse to verse feels abruptly experimental, as though we’re listening to an artist going out on a limb where any other player might have been hesitant to do as much. This isn’t a point of emphasis towards Croce’s ego so much as it feels like an acknowledgment of her depth, which isn’t exactly something I’ve been seeing a lot of her contemporaries in folk music doing in the past couple of years as the genre has experienced a tremendous resurgence on both sides of the dial.

I didn’t know much about Sean Della Croce before I listened to “Rebecca Henry,” but this introduction to her sound has absolutely left me bewitched and charmed by the notion of what she might be able to do in the near future with more creative ambition than she’s willing to pursue for this initial offering. She’s got a lot in the tank – that much is obvious even from a distance in “Rebecca Henry” – but how she puts it to use for her in the next couple of singles she releases is ultimately what will dictate how far she’s going to go in the mainstream market.