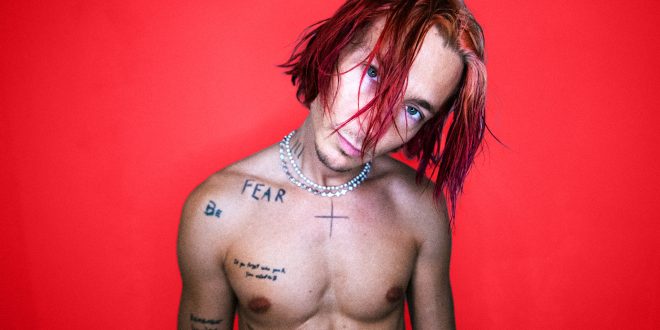 Jagwar Twin, the musical project of artist Roy English, released their sophomore album 33 today via Big Loud Rock. The project exists as the near-supernatural alter-ego of English, and defies any barrier of genre or conventional music capsule. Produced by long-time collaborator, Grammy-nominated Matthew Pauling (Twenty One Pilots, 5 Seconds of Summer) adds his signature high charged flare to the album’s sound and helps to create a raucous album that sizzles with personality.

The number 33 holds significance, encapsulating the journey of the album to “Reclaim Your Crown.” English explains, “I felt a shift once I turned 33. Like a switch flipped and I knew my purpose and why I was even still making music after so long and so many ‘failures.’ I have a different story to tell. One that I feel like only I can tell.” The resulting album takes listeners on a journey through the highs and lows of pandemic life, self discovery, and emphasizes the themes of empathy, community, and creative expression.

“Happy Face” is the track that kicked off the new project and became a quick online success. Released in December of 2020,  the song quickly gained momentum thanks to its relatable theme of putting on a smile for social media despite reality. The track currently boasts over 43 million streams on Spotify and over 2 million views on YouTube. With its release, Jagwar Twin unlocked a new possibility of music marketing in the digital age, unleashing an award-winning digital experience (see case study here). Additionally, a Mad Libs-style interactive emoji experience unveiled singles “Down to You,” followed by the trippy cake-fueled experience for “I Like to Party.”

The arrival of 33 coincides with the launch of the Jagwar Twin digital universe Hall of Mirrors. The culmination of a months-long Web3 campaign, it is an immersive Web3 environment that rethinks the artist-fan equation. On this interactive platform, fans, identified by their unique crown NFTs, are able to immerse themselves inside a universe of Jagwar Twin’s creation, discovering and unlocking hidden objects. The platform will grow as a source for fans to discover, access, and immerse themselves in the lore of Jagwar Twin as well as mint 1 of 33NFTs of “Happy Face.” Participating in this digital landscape allows fans to access real-life experiences, including unreleased demos, early songs, voice notes, music videos, 3D scans of important objects from Roy’s Life, never before seen artwork, poems, as well as the ability to gain access to exclusive merch collections for NFT holders, early access to show tickets, meet and greets and more. It’s a 21st century Pandora’s Box of fandom goodies.

The creativity and out-of-the-box thinking behind the album is only the tip of the iceberg for this artist’s imagery and vision. With Matt Pauling’s expert production, and mixing done by Jeff Ellis (Grandson, Frank Ocean, Doja Cat), the album contains a lively and carefully constructed sound. Distorted garage-rock guitars and grimy breakbeats combine with electro-pop flourish and soulful R&B into a unique style that’s broadly “alternative” and paints the portrait of Jagwar Twin. 33 is a nuanced party album (see track 4: “I Like to Party”) perfectly molded with high tempo alternative dance tracks that instigate movement and a larger-than-life feeling. While it rides high for the majority of the 10-song tracklist, softer moments are heard in pop-ballad “Another Way II Heaven” and “Image A World”, and pull the album down a little bit closer to Earth with English’s vulnerability.

The majority of the songs are captivating and confessional in equal measure. Jagwar Twin provokes intrinsic thought, adapting to rapidly evolving changes in culture with the speed and agility of the enduring “big cat” of the Americas. Sonically, the album soars with its upbeat, alternative stylings. Highlights are found in the glimmering, nostalgic flare, that utilizes well placed synth beats atop a horn section to recall 70s-discotech ambiance, on track “Pay Attention”. English’s soulful pipes are periodically highlighted throughout the LP, although many tracks prefer a heavier production layered to distort any vocals. When we’re indulged with his raw voice on “Soul Is A Star” it’s a treat to the ear, and made better with its infectious beat.

The album closes out with the haunting, stripped down track “The Circle” which plays out like a hymn, or an ode to Jagwar and all they encompass. Lyrically, they emphasize the importance of valuing the things that unite us, rather than what divides us. The transcendental qualities of these sentiments speak volumes for the artistic intentions of Jagwar Twin, and their efforts on 33 embody these very human emotions. They strive to create an open, ever-growing era of authenticity, self-reflection, and tranquility, all while dancing and having a great time on the way there. 33 is out now.