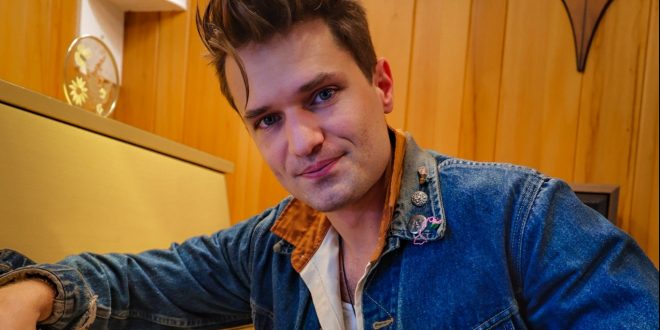 1
SHARES
FacebookTwitter
AJ Smith “We’re All Gonna Die” (pop-rock)
https://youtu.be/FCC4ib00O50
Breathing new life into pop-rock, AJ Smith has been steadily climbing the charts with his nostalgia-laced, effervescent tracks that recontextualize modern music. Heavily inspired by pop culture and the zeitgeist of the 2020s, AJ Smith’s music is a time capsule of the feelings and emotions we are all currently experiencing. Blessed with booming vocals, impeccable songwriting, and rockstar stage presence, he’s earned numerous accolades, including the prestigious Abe Olman Scholarship from the Songwriters Hall of Fame and a semi-finalist ranking in the 2020 International Songwriting Contest. Most recently, AJ Smith made his prime-time TV debut on The Kelly Clarkson Show, where his songs hit a new level of exposure. Whether it’s bubbly pop tunes or cascading rock ballads, AJ Smith’s versatility is multifaceted, making him a thrilling act to follow.

AJ Smith’s latest track, “We’re All Gonna Die,” bears a jarring title, but it offers a triumphant look at all the battles listeners have overcome in just a few short years. Facing a global pandemic, political tensions, recession, and the rapid development of integrated technology have all played a pivotal role in shaping the current existential dread many are dealing with. “We’re All Gonna Die” serves as a cathartic release of these emotions with powerful lyrics and ’80s stadium rock-style verses. The music video showcases AJ Smith’s impeccable ability to curate powerful visuals that elevate the song’s theme. The video is rapid intercut shots of the artist getting pulled into a virtual world where he battles with fiction and reality. It’s a thought-provoking visual that encourages viewers to question their relationship with technology and internalized issues.

Walk us through the process of creating the meaning behind “We’re All Gonna Die”. Was there a specific moment that inspired the song’s message?

I had a pretty rough mental health crisis which evolved into an additional existential crisis. And mix that together with the war in Ukraine (we have friends who have had to evacuate), having gone through a pandemic, I felt like there was this space for this almost generational anguish, but in anthem form where we reclaim power over those existential, complicated, heavy questions. And say the taboo piece out loud. Say we know it is inevitable that we won’t be here one day, and none of us know when that day is, so let’s make the most of every moment we can. Live resonating with our passions and purposes and find freedom in acknowledging that the future is uncertain.

Can you describe your first memory with music, and when did you discover it was a passion of yours?

One of my earliest memories of music is sitting in my godmother’s house, on the floor, playing music puzzle games and having a xylophone. She is a piano teacher and that’s the start that I remember. Learning the note names and starting to piece together how to make music.

Did you have any specific inspirations or references for the music video’s content when planning its overall concept?

Absolutely. I called Evan, the director, and I basically said, “how can we make a ‘Black Mirror’-like music video with only 4 hours to shoot and basically no budget?” And we made it happen!

“So f’ing tired of just surviving all the time. I want to scream into the night ‘I’m Alive, I’m Alive’!” are unforgettable lyrics. Where were you at in your life to have written these lyrics? How do you hope your fans feel after listening to the track?

I think I was working on a project completely unrelated to my music at 1am and all I wanted to do was stop and write a song for myself, but it was due the next morning. And I was just filled with this dread of the routine and burnout from working other jobs and projects to be able to afford to go on tour or get the next song mixed or pay for a music video. And it’s a pretty exciting time in that “We’re All Gonna Die” is performing better than any song I’ve ever released, which means I have more money coming in from my music than I ever have before, and all borne out of that frustration and anger and disappointment of how hard it can be to thrive as an artist and how we have to instead fight to survive until you either make it or give up.

How did you generate the concept for the “We’re all Gonna Die” music video? What is your favorite element of the visual, and why?

I was thinking a lot about virtual reality and when Evan locked in the Museum of the Moving Image in Queens, NY as a filming location, we built our shot list around that space. I think my favorite element of the visual is the green screen room when I’m digitized in some other world and disappearing into bits and bytes.

My next song (haven’t even announced which one!) is dropping October 14!

Previous THE HATE CLUB Unleashes Official Music Video for New Single, “Cursed,” off of Upcoming, Debut LP!
Next Single Review: Little Hurt “Cooler If U Did”