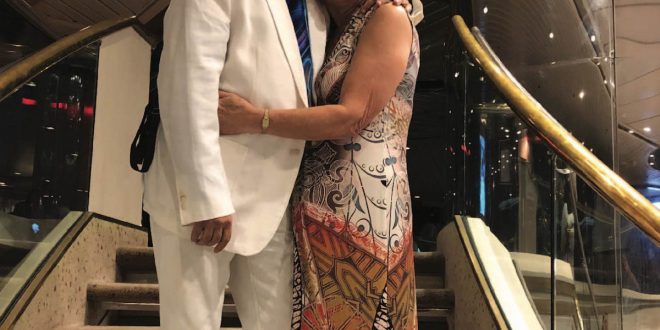 Les and Loretta Fradkin’s California has likely produced one of the best pop singles in recent memory with their latest. “Perfect World” is a harmony and melody laden work reminiscent of five-star pop from bygone days. Les Fradkin, however, lights up this performance even brighter with his imaginative powers; there’s a snap in these melodies you don’t hear from every performer and the way he ties in one line with the next possesses an ineffable quality that few others offer. These talents emerge from California feat. Les Fradkin’s work with melodic vividness and palpable yearning from the song’s first line through its last.

Joy comes through as well. Fradkin, especially during the chorus, does an outstanding job of communicating the unbridled and distinctive joy that the song’s subject brings into his life. It comes across without irony – in fact, the vocals flirt with the suggestion that the performance is such an inspired moment for Fradkin that he can scarcely contain himself. It makes for a bracing listen that you can’t ignore.

The lyrics are working within a definite tradition, “Perfect World” is a love song without a doubt, but Fradkin brings his own flavor to that form. The humility running through the song borders on self-deprecation as the lyrics hold up its subject as a more complete and less complicated vision of what the singer cannot – at least on their own. It’s the subject’s presence in their lives that sprinkles the necessary fairy dust.

He supercharges the track with energetic drumming that plunges straight ahead from the outset. It doesn’t sacrifice so much as a drumbeat of musicality, however. Fradkin’s guitar playing is strong throughout the song but particularly highlights near the end. He drops in some clean and melodic fills that help deepen the song’s impact far into the performance. The swirl of assorted musical elements in this track picks listeners up and sweeps them away for an experience they will not soon forget.

Fradkin and his wife Loretta are featured in the song’s accompanying music video. It’s a DIY affair, like the song itself, but there’s a lot of “handmade” magic surrounding this project. It’s difficult to imagine anyone enjoying the song who won’t enjoy the performance as well. The split-screen approach to presenting Fradkin, his wife, and the song in a visual way is as straightforward as the songwriting itself. You take the promotional clip, the song, and everything about this release together and it becomes apparent that California feat. Les Fradkin has the chance to still be a major force in pop music today.

Let’s hope that songs such as this bear some commercial fruit for Fradkin, under whatever moniker, because we need music like this today. Power pop for Now people is how Fradkin describes songs such as this and his other current work – “now” people are those who aren’t chained to unhappy pasts, grousing over uncertain futures, and instead are embracing their moment in life. You can hear that in “Perfect World” and you’ll keep hearing it from Les Fradkin, no matter what the band’s name is, for as long as he continues writing songs.