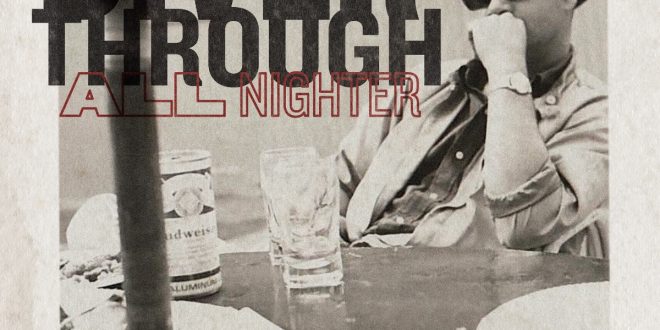 Diver Through’s third album release All Nighter is the next natural development in a musical story that songwriter/singer/guitarist Michael Baynes kicked off in 2013. The project has transformed some since those fledgling beginnings almost ten years ago and the latest offering boasts a three-member configuration serving up intelligent alternative rock. The power trio doesn’t limit the album’s musical choices to guitar, bass, and drums, however, as there’s liberal use of both keyboards and piano during the course of All Nighter and their inclusion helps fill out already exceptional musicians.

“That Side of Me is Rage” may imply that it is an outright nod to the band’s punk influences. The truth, however, is a layered and complex thing. Diver Through and their songs rarely settle on being any one thing and “That Side of Me is Rage” settles on being moodier than outright discontent. Hardcore music fans will find a lot familiar here, yes, but Baynes’ has a distinctive songwriting twist with his sometimes-unusual changes and texture shifts; the opener encapsulates that wont rather neatly for new and longtime listeners.

“To Death” is not as heavy handed as the title might suggest. It does, however, have a predictably intense lyric but, if anything undermines the song, it isn’t that. Diver does themselves no favors contenting themselves with a straightforward arrangement instead of bobbing and weaving like they customarily do for listeners. Some may get the feeling they are after a specific effect with this cut and it’s questionable if it comes off.

The title song “All Nighter” simmers with passion. It also exhibits Baynes’ outstanding skill for constructing introspective yet physically engaging alt rock. “All-Nighter” has an elegiac tilt that we hear elsewhere in the album, it may be full of distorted guitars, but the melody is never far and Diver Through maintains accessibility. “Time Capsule” is more well lived-in music that has a misleading flat “effect” that gradually shapes the listener’s mood during the song. The short lulls Baynes and his cohorts scatter throughout the arrangement pepper the song in an interesting way.

Ken Nasta plays hard each time out and his direct drumming gives “Vials” a steady push from almost the outset while the production inflates Baynes’ guitar into a seeming wall of sound. The song is nevertheless quite musical and the aforementioned rhythm section playing, joined by Mike Rellah’s bass, is sinewy yet muscular. Nasta’s drum sound for the album, captured by producer Chuck Nash in his home studio, is a highlight song after song but the best moment comes with the penultimate “Ice Cubes”.

The authoritative snap of the snare throughout the performance gives the song one of the strongest rhythmic spines a performer can ever hope for. There is a great deal to love and admire about this album, even if it sounds like Diver Through is just hitting their stride and there are better days to come. All Nighter is a great third release, however, and should move them forward rather than setting them back or keeping them still.